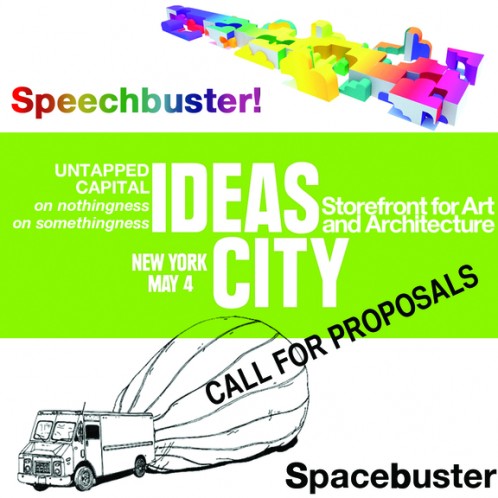 On Nothingness / On Somethingness

Untapped Capital is synonymous with innovation. To innovate is to identify and create new opportunities where no one saw them before. On Somethingness/On Nothingness was a one-day event which took place on Saturday, May 4th during the Ideas City Festival that brought into the public a different way to organize and perceive the world around us. Either by remixing existing conditions in new forms or by unveiling invisible forces, On Somethingness/On Nothingness offered to the public a new catalog of Untapped Capital for the future of cities and citizens.

On May 4th at the Sara D. Roosevelt Park, within the footprint of the StreetFest and as part of the 2013 Ideas City Festival, Storefront for Art and Architecture presented a daylong series of performances and talks by artists, architects and citizens at large that attempted to bring new ways of understanding, perceiving and acting on the city that surrounds us.

For this daylong event, Storefront invited individuals and collectives to submit proposals for one of the two complementary projects presented as part of the IDEAS CITY 2013:  The Spacebuster: On Nothingness, and The Speechbuster: On Somethingness. On Nothingness allows for noise, confusion and illegibility, to see something there where others see nothing. On Somethingness brought people together around subjects and ideas with which we are all familiar in inventive ways, including folklore, technology, recycling, or other resourceful ways. To view the full Call for Projects, please click on the link to the right of this page.

The Call for Projects is now closed.

Selected artists to present projects include:

The 2013 iteration of IDEAS CITY, the biennial festival created to explore the future city and to effect change, will take place in downtown New York from May 1-4, 2013.  The theme for IDEAS CITY 2013 is Untapped Capital.  Rather than focusing on deficits, IDEAS CITY 2013 will encourage intensive examination of surplus resources that may be under-recognized or underutilized: Untapped Capital.  There are many ways of thinking about what might define “untapped capital,” ranging from people and raw materials, to ideas, networks, varied resources, and modes of communication. The topic of Untapped Capital provides a touchstone for alternative thinking about new methodologies, new solutions, and new goals.

Storefront for Art and Architecture is one of the Ideas City Festival Executive Committee institutions with the New Museum, The Architectural League, the Poetry Bowery Club, the Drawing Center and NYU Wagner.