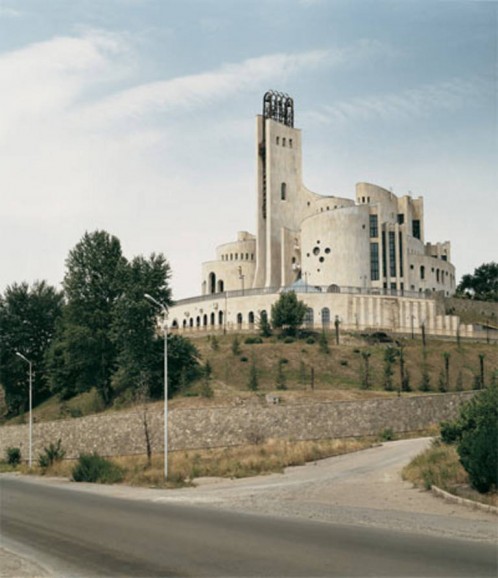 How could such unusual and eclectic architecture be produced in a era notorious for mass-prefabrication and highly-standardized construction processes? This talk offered an insight into the social and cultural context into which the buildings documented in the CCCP exhibition were born, with specific reference to key events such as the exhibition of Finsterlin drawings in the Moscow Museum of Architecture or the construction of a Buckminster Fuller pavilion in the ‘America’ exhibition in Sokolniki.

Anna Bronovitskaja is editor of Moscow-based architecture magazines Project Russia and Project International. She is also Associated Professor at Moscow Institute of Architecture, and the co-author of the guide-book Moscow Architecture
1920-1960.

This talk traced the role of monuments and war memorials within the framework of constructed social utopias, touching on issues of looting and provenance in art, the designs of war memorials across Russia and Eastern Europe and the global discourse of totalitarian architecture and democracy. Tracing the parallels between Khrushchev’s Thaw (1960s), Brezhnev’s Stagnation (1970s) and Gorbachev’s Glasnost (1980s) and their resonances in Soviet Modernism, Technologism, and Postmodernism, this lecture offered an insight into the architectural manifestations of mass propaganda, political delusion and deception, and the climax, twilight, and demise of Communist Utopia.

The CCCP Small Talks were made possible thanks to the generous support of the Trust for Mutual Understanding.