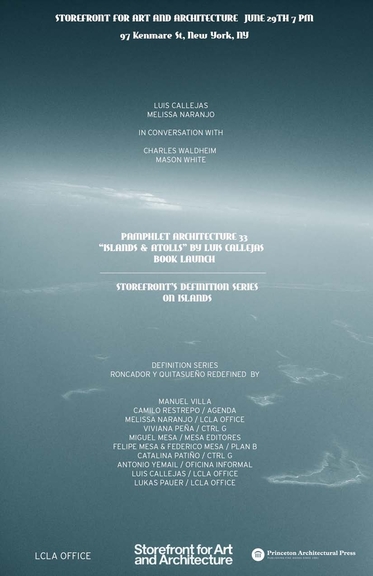 Storefront presented Definition Series: On Islands on the occasion of the launch of Pamphlet Architecture 33 “Islands and Atolls” by Luis Callejas. For this event, selected Colombian studios worked to redefine the currently disputed banks and atolls of the San Andres Archipelago by intervening a Colombian stamp from 1956 that shows the archipelago as an oceanic region. The stamps were on display at Storefront’s gallery during the event.

As part of the Storefront Definitions Series, definitions of “Islands” emailed to info@storefrontnews.org prior to the event are gathered as part of Storefront’s ongoing compilation of definitions.

Luis Callejas’ (LCLA Office Medellin, Colombia) proposal was selected as the first of two winners for the Pamphlet Architecture 33 architecture competition, which calls on previous authors in the series to nominate the architects and theorists whose work represents the most exciting design and research in the field today. Published consecutively under the purview of architect Steven Holl over the past 35 years, Pamphlet Architecture 33 comprises an index of provocative proposals ranging between the theory and practice of design, buildings and cities. Participants in the most recent competition were nominated by previous authors from the series. The jury was conformed by: Kevin Lippert, Steven Holl, Toshiko Mori, Michael Bell, Stan Allen, Marion Weiss, and Jennifer Thompson.

Luis Callejas will be the next author to be a part of the Pamphlet Series with the launch of Pamphlet Architecture 33: Islands, Atolls, and Other Derivative Territories, which calls into question how architecture might critically repurpose its traditionally limited disciplinary tools in order to make a meaningful impact at a territorial scale.

Functioning as a landscape architect in a country where the field is not yet stablished, Callejas questions pedagogical, disciplinary, and political norms at macro levels using micro tactics. As a result, Pamphlet Architecture 33 provocatively expands devices such as repetition and aggregation beyond their limits in scenarios where sociopolitical constraints seemingly prohibit what would normally be understood as a landscape architecture intervention.

Pamphlet Architecture 33 “Islands and Atolls” will be available for purchase at the event.


The Definitions Series invites a series of individuals to construct, propose and articulate definitions of a specified term.