home • archive • Dolan Morgan and Cameron Blaylock: The Weathermen Turn Themselves In

Dolan Morgan and Cameron Blaylock: The Weathermen Turn Themselves In 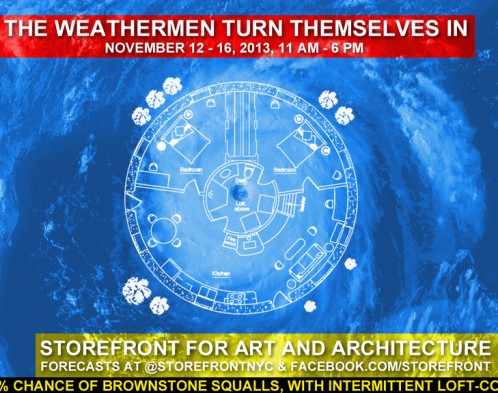 The Weathermen Turn Themselves In

The Weathermen Turn Themselves In charts a world where families are raised not in houses but hurricanes; where duplex apartments don’t sit on the street but pelt us from the sky; where finance companies operate not in skyscrapers but from the top floor of a tornado.  The Weathermen Turn Themselves In finally asks the absurd question: what if architecture and weather switched positions? By reversing the natural world with our constructed environment, we examine not only the boundaries, limitations and correlations between the two – but also between that which we can control and that which we cannot. The afternoon forecast is a 90% chance of condo squalls, and we’re advised to stay inside the comfort of our storms. Now, quick: what is an umbrella.

Dolan Morgan is the author of That’s When the Knives Come Down, a short story collection forthcoming in 2014. He lives in Brooklyn and edits The Atlas Review. His work can be found in The Believer, Field, Pank, Armchair/Shotgun, The Collagist and elsewhere.

Cameron Blaylock is a Brooklyn-based photographer and artist. Cameron’s recent projects include Visions, a collaboration with writer Dolan Morgan; An Apple A Day…, an art-making-on-consecutive-days project shown in conjunction with New York poetry series The Highwaymen NYC; and Typecast, an investigation into the “towers-in-the-parks” typology that was presented at the New Museum’s 2013 Ideas City StreetFest. In 2010, Cameron received a European diploma in fine arts from Bauhaus-University.