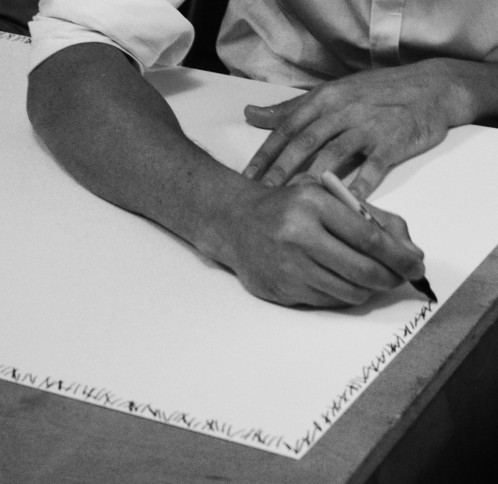 On the occasion of the closing of Fast Buildings, Storefront presented Drawing Series: A Line. The program invited participants to draw a single, continuous line for seven minutes while articulating the ideas behind their drawing decisions.

Fast Buildings was a pop-up show at FXFOWLE’s gallery space that presented works from recent iterations of Storefront’s drawing show, including Aesthetics / Anesthetics (2012), POP: Protocols Obsessions Positions (2013), Measure (2015), and Sharing Models (2016). The drawing show invited a select group of participants to interrogate the architectural drawing, using Storefront’s gallery space or the island of Manhattan as a site to explore and reflect upon specific topics—from aesthetic clichés to disciplinary obsessions to data visualization—in order to present innovative architectural ideas.

A Line was part of Storefront’s Drawing Series in which scholars and practitioners engage in the simultaneous acts of narration and drawing, using tools that range from pen and paper to digital devices. The events invoke a discussion around the relationship between modes of production and their representation. A real-time video feed of the drawing process records and displays the performance for the audience.