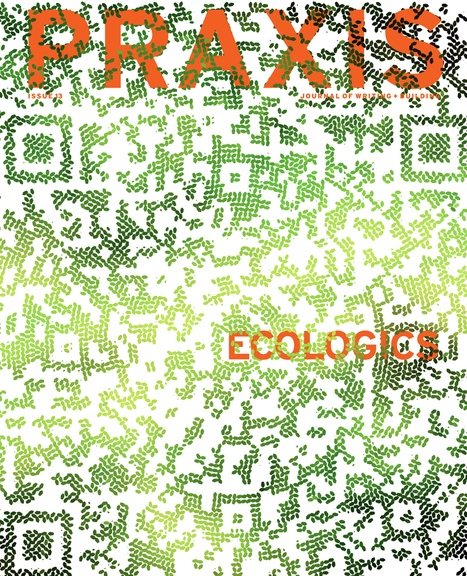 Interrogation Series: Interrogating Green centered on the interrogation of contemporary approaches to sustainability in architecture. In a roundtable discussion between a selection of contributors to Praxis 13: Ecologics, each participant was given a series of questions beforehand and the focus was on conversation rather than presentation.

Ecologics considers how architecture might adopt the logics of ecologies to move beyond received notions of sustainability. Questioning the image of “green,” the projects and essays featured in this issue address architecture’s ecological performance. Operating at multiple scales, they propose an approach simultaneously radical and pragmatic, addressing critical environmental issues through precisely calibrated and rigorously researched solutions.

Amanda Reeser Lawrence is an Assistant Professor of Design at the School of Architecture at Northeastern. She received her Ph.D. in architectural history and theory from Harvard’s Graduate school of Design, an M Arch from Columbia University GSAPP, and her BA from Princeton University. Lawrence is a founding co-editor of PRAXIS. Her forthcoming book, James Stirling: Revisionary Modernist, will be published by Yale University Press in the Spring of 2013.

40 copies available for purchase at Storefront during the event

Lateral Office is a design practice based in Toronto, Canada, founded in 2003 by Lola Sheppard and Mason White. Their work, which is the subject of Pamphlet Architecture #30: Coupling, interrogates the intersection of architecture with infrastructure and environment. Lateral Office is a recipient of Holcim Awards Gold 2011, Emerging Voices 2010, and Canada Council for the Arts Prix de Rome 2010.

Founded by Sarah Dunn and Martin Felsen, UrbanLab is a research-based architecture and urban design practice. UrbanLab theorizes that infrastructure can be hybridized, thereby leveraging a technically oriented project into one with cultural qualities. It presumes that possibilities for design innovation arise out of the investigation of the various constraints of combining infrastructural and ecological systems with cultural desires. Advancing ideas of infrastructural and ecological urbanism, UrbanLab proposes a hybridization of landscape, city, infrastructure, and ecology that attempts to address the issue of contemporary public space and urban architecture. Through different scales and kinds of urban sites, UrbanLab’s projects develop the means or techniques of this hybridization.

Joyce Hwang, AIA, is an assistant professor of architecture at the University at Buffalo, SUNY, and the Director of Ants of the Prairie, an office of architectural practice and research that focuses on confronting contemporary ecological conditions through creative means. Currently she is developing a series of projects that incorporate wildlife habitats into constructed environments. Her most recent work has been made possible by an Independent Projects Grant from the New York State Council on the Arts (NYSCA), as well as a residency at the MacDowell Colony, where she was selected as a National Endowment for the Arts Fellow. Hwang is a registered architect in New York State. She has previously practiced professionally with offices in New York, Philadelphia, San Francisco, and Barcelona. She received a post-professional Master of Architecture degree from Princeton University and a Bachelor of Architecture degree from Cornell University, where she received the Charles Goodwin Sands Memorial Bronze Medal.

Urban-Think Tank (U-TT) is an interdisciplinary design practice dedicated to high-level research and design on a variety of subjects, concerned with contemporary architecture and urbanism. In 1993 Alfredo Brillembourg founded U-TT in Caracas, Venezuela and in 1998 Hubert Klumpner joined as co-director. Since 2007 Brillembourg and Klumpner have taught at Columbia University, where they founded the Sustainable Living Urban Model Laboratory (S.L.U.M. Lab), and since July 2010 they have held the chair for Architecture and Urban Design at the Swiss Institute of Technology, ETH in Zurich. They have been awarded the 2010 Ralph Erskine Award from the Swedish Association of Architects. U-TT has offices in Caracas, Sao Paolo, New York, and Zurich.

Lydia Kallipoliti is an architect and a writer holding architecture degrees from MIT and Princeton University. Currently she is an assistant professor adjunct at the Cooper Union and at Columbia University in New York; she is also a senior associate at the Cooper Union Institute of Sustainable Design. Kallipoliti is the founder of EcoRedux, an innovative online resource for ecological material experiments. Her writings and design work have been published widely and exhibited internationally.

Future Cities Lab is an experimental design and research office based in San Francisco, California. Design principals Jason Kelly Johnson and Nataly Gattegno have collaborated on a range of award-winning projects, exploring the intersections of design with advanced fabrication technologies, robotics, responsive building systems and public space. Their work has been published and exhibited worldwide. They were most recently awarded the 2011 Architectural League of NY Young Architects Prize. They currently teach at the California College of the Arts and UC Berkeley.

Aershop (Architecture, Environment, Research) is an internationally recognized design firm based in New York City led by Takuma Ono and Darina Zlateva. As a collaborative practice, the firm situates its work within contemporary discourses in ecological urbanism, architecture and landscape, computation, and advanced visualization. Aershop’s unique design process breaches disciplinary boundaries to bring inventive projects to the forefront of design culture. The work of the firm has been shortlisted for a number of international competitions and featured in Newsweek, Topos, Harvard Design Magazine, and The Architect’s Newspaper

PORT Architecture + Urbanism is a leading-edge urban design and research practice based in New York and Chicago. Established by Christopher Marcinkoski and Andrew Moddrell as a speculative urban research collaboration, PORT A+U has evolved into one the most innovative urban design consultancies operating in the United States today. The practice synthesizes expertise in architecture, urbanism, landscape and planning to provide exceptional solutions to unique design challenges at every scale of the urban landscape.