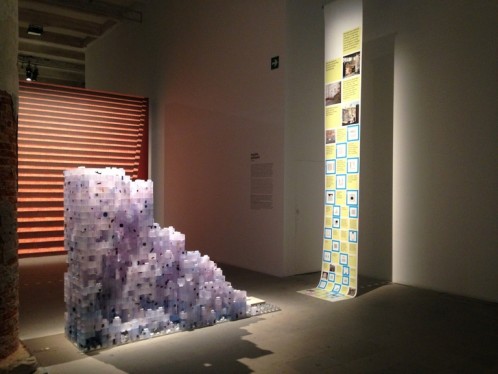 A global archaeological laboratory, a city half-buried in a mound of lava, a sinkhole for cultural funds, a cipher for Italy’s cultural disarray—Pompeii is all of these things, but it is also a testing ground for preservation theories and practices. Since the Enlightenment, every mission to ‘discover’ the city has been followed by the invention of techniques to repair and stabilize it. Our installation at the 14th Venice Architecture Biennale describes and performs the problem of preserving Pompeii. The Data Fresco diagrams the history of Pompeiian conservation experiments in order to make the site legible to the visitor again. The Souvenir Pile offers ersatz Pompeiian matter, cast in resin blocks, to the Biennale public, as a material record of the site and a souvenir of the Italian cultural experience.

Please email a photograph of your block in its new home toLegiblePompeii@gmail.com

Lucia Allais is an architectural historian and theorist who specializes in the material history of exchanges between architecture and political institutions in the modern period, especially in a global context. Her work has appeared in the journals Perspecta, Volume, Log and Grey Room, and the edited volumes Governing by Design, Multiple Signatures, Formless Finder, and Global Design History. She is working on a history of monument survival and international bureaucracy in the 20th Century, tentatively titled Designs of Destruction. She has received fellowships from the Princeton Society of Fellows, the Graham Foundation, the Krupp Foundation, the CASVA, and the Radcliffe Institute. She is an Assistant Professor of Architecture at Princeton University, a member of the Aggregate Architectural History Collaborative, and an editor of Grey Room.

Located in New York City, MOS is an architecture studio known to produce original and recognizable work that challenges the boundaries between architecture, urbanism, art, and technology. MOS has received numerous awards, including a 2013 AIA New York State Citation for Design for the Lali Gurans Orphanage in Kathmandu, Nepal, the Architecture Award given annually by the American Academy of Arts and Letters; was named one of North America’s “Emerging Voices” by the Architectural League of New York as well as “Avant Guardian” by Surface Magazine. The firm has been featured by The Creator’s Project and in exhibitions at the Museum of Modern Art, the Venice Architectural Biennale, the Wexner Center, the Cooper-Hewitt Museum, the Shenzen Architectural Biennale, Institute of Contemporary Art in Boston, and the Art Institute in Chicago. In 2012 Everything All at Once: The Software, Video, and Architecture of MOS was published by the Princeton Architectural Press.

Legible Pompei is part of the Storefront Starter initiative.