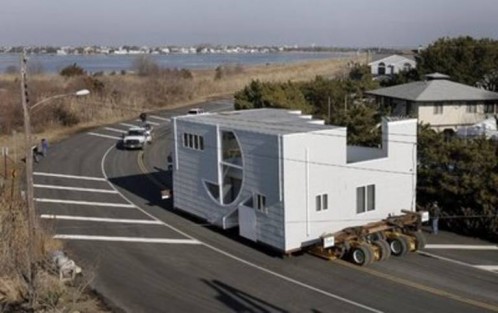 The opening event featured a presentation by the organizers of the relocation, architect Frederic Schwartz and filmmaker Jim Venturi.

March 13: A Modern Masterwork Sails up the East River

A gathering at South Street Seaport took place to watch Robert Venturi and Denise Scott Brown’s Lieb House carried via barge under the Brooklyn Bridge and into Long Island Sound.

The relocation, organized by Frederic Schwartz and James Venturi, saved the historic home from demolition at the original Long Beach Island site. The passage of the house and the assembled onlookers were filmed by 13 cameras, including a heli-cam, to become part of Jim Venturi’s documentary on Robert Venturi and Denise Scott Brown.

About the Lieb House
“In 1967 Nathaniel and Judith Lieb commissioned Venturi to design a beach house on newly reclaimed land in Barnegat Light. Completed in 1969, the modestly-sized residence falls midway between his seminal publications, Complexity and Contradiction in Architecture (1966) and Learning from Las Vegas (1972), and contributed to the young architect’s emergent career. With obvious pride yet irreverent humor, Venturi, in Progressive Architecture (1970), described the home as “a bold little ugly banal box.” In mid-August during her second summer in the house, Mrs. Lieb may have upset some of her neighbors when she remarked in The New York Times: “I guess they thought it was so much uglier than theirs-but then probably they don’t consider their own houses ugly. . . . It’s a real dumb house, just a box, but it’s gorgeous.”

On January 31, 2009, the Lieb House was sold by Leroy and Sheila Ellman, the fourth and longest resident owners, to a developer with more interest in the substantial lot than the Venturi landmark. The sellers, who took care to maintain the essence of the original design, were rightfully concerned that the 1,835 square-foot home would be razed and contacted Venturi Scott Brown and Associates. Working to beat the settlement timetable and the developer’s bulldozer, arrangements were made to move the house from its site. James Venturi, a filmmaker and son of Robert Venturi and Denise Scott Brown, spearheaded the relocation plans while working on a documentary about his parents’ career. The Lieb House is currently sitting at a bayside dock only a few streets from its original site, awaiting transport by barge for the 20-hour ride to Glen Cove, NY.”

(Excerpted from Only 40 but Having A Change of Life, a text by Fred B. Adelson, Ph.D., Professor, Art Department, Rowan University)