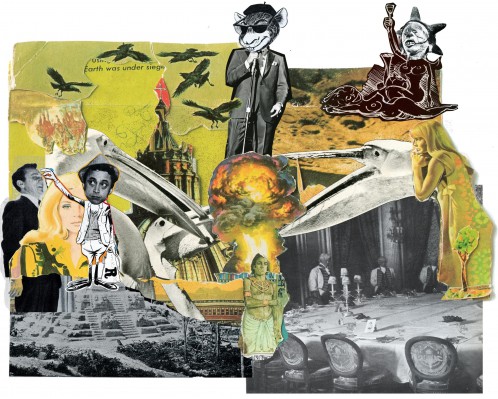 "Paranoia Man in a Rat Fink Room" by Jonah Freeman and Justin Lowe. Commissioned by Storefront for Art and Architecture and the New York Comedy Festival. Courtesy of the Artists.

By Jonah Freeman and Justin Lowe

Storefront for Art and Architecture is closing its doors for good. The real estate vultures have descended to feed on the malnourished carcass of its signature Kenmare Street space. Its replacement will most likely be a Juice Press supplement administered through fiber-optic eyeliner. The official announcement is that it will be something called SAN SAN. A flagship store for BAMA Cosmetic Pharmaceuticals, OCTOPUS Entheobotanical Data Networks and Fata Morgana Entertainment Systems brought to you in a fancy new package designed by interior starchitect Henri Erkins. “A multiplatform consumer experience where virtual and tactile interaction merge in a new marketing sphere.” A kind of combination Pizza Hut-Taco Bell-Google daydream for the Lower Manhattan demographic. But before the polish of recycled paper, space rock, and smartphone flirtation bring about point-of-purchase orgasms, Jonah Freeman and Justin Lowe have arranged for an interim scenario.

The overstock of Jungle Video, the now defunct media superstore you may remember from your drive to LAX via La Tijera Boulevard, is coming to Storefront for Art and Architecture for a fire sale of such gray market classics as Linguini is Not a Flower and Thank God For My Forties. A Canal Street-style kiosk of bootleg handbags and toxic perfume will stage a pop-up shop for all manner of DVD, VHS, Compact Disc, Louis Vuitton, Calvin Klein, Prada, and perhaps a dime bag of heavily stepped on cocaine if you know the password. But this will only be the first stop on the path to the headlining act: a reprisal of the infamous Rat Fink Room.

Jackie Kannon, its ringmeister, was a mobbed-up sycophant comic who felt pressured to buy himself a nose job in the hope of breaking out of the borscht belt. He was not even dimly aware of what might be at stake in the obscenity trials of the time, around such now-classic works as Howl and Naked Lunch. For him, “working blue” was about the money. Morris “The Octopus” Levy, the founder of Birdland and Roulette Records, was a mob connected music business executive who is mostly remembered as a crook who stole from recording artists, and was convicted of extortion and suspected of heroin distribution. Levy used the Rat Fink Room and his other venues as a place to surreptitiously record comedy acts and release records without the comics’ permission. He gave them no portion of the proceeds and threatened bodily harm if they sued. In the spirit of this, Freeman and Lowe have converted the neighbor’s bathroom (Staci, age 12, addicted to synthetic marijuana) into a surveillance headquarters that will keep audio/video recordings of the last days of Storefront.

The Rat Fink Room will be alive again in the twilight of Storefront for Art and Architecture through a series of nights programmed by Caroline Hirsch and the New York Comedy Festival from November 2nd to November 6th.

It is true that the New York City of the 20th century imagination is gone and never to return. But there will be a copy of New Jack City shot on a handycam in 1993 at Worldwide Cinemas on 50th St. and 8th Ave. available for purchase.

Paranoia Man In A Rat Fink Room opened in tandem with the 13th annual New York Comedy Festival, which takes place annually during the first week of November at venues throughout New York City. As part of a special week-long preview, Caroline Hirsch, founder and owner of the New York Comedy Festival and Carolines on Broadway, curated comedic programming inside the installation, bringing to the space a functioning nightclub and entertainment venue complete with live stand-up performances by more than 20 comedians.

For more information about the performances and preview events, see here.

On Tuesday, November 8th, Storefront for Art and Architecture and the New York Comedy Festival presented the public opening of Paranoia Man in a Rat Fink Room, which coincided with the US presidential election. Guests entered the Rat Fink Room, and experienced election-related programming and coverage throughout the evening. Live New York Comedy Festival stand-up performances were interspersed with the coverage, and hosted by Sarah Armour.

ABOUT THE NEW YORK COMEDY FESTIVAL

Now in its thirteenth year, the New York Comedy Festival is produced by Carolines on Broadway in association with Comedy Central. The festival has featured the country’s top comedians, including Aziz Ansari, Judd Apatow, Hannibal Buress, Bill Burr, Louis C.K., Margaret Cho, Billy Crystal, Larry David, Ricky Gervais, Kathy Griffin, Kevin Hart, John Leguizamo, Norm Macdonald, Bill Maher, Tig Notaro, Nick Offerman, Amy Schumer, Sarah Silverman, and Wanda Sykes, to name a few. In 2007, the festival launched the “Stand Up for Heroes” event to benefit The Bob Woodruff Foundation, which has featured performances by Ricky Gervais, John Mayer, Seth Meyers, John Oliver, Conan O’Brien, Ray Romano, Jerry Seinfeld, Bruce Springsteen, Jon Stewart, and Robin Williams, among others.  To date, the “Stand Up for Heroes” events have raised over $33 million.  For more information please visit the NYCF website, like the NYCF Facebook page, and follow the NYCF on Twitter, @NYComedyFest.  This year the festival has a new hashtag — #MakeNYLaugh — for use in all of its social media platforms.

ABOUT JONAH FREEMAN AND JUSTIN LOWE

Jonah Freeman was born in 1975 in Santa Fe, NM and lives and works in New York City. He holds a degree in Film Production and Dramatic Writing from NYU Tisch School of the Arts. Since 1998, he has been exhibiting film/video, photo and environmental installations in galleries and museums worldwide. His several interconnected bodies of work primarily focus on the phantasmagoria of the constructed world. Recent solo exhibitions include In The Kaleidoscope Room, Mitterrand + Sanz, Zurich, Switzerland (2009); The Long Goodbye, John Connelly Presents, New York, NY (2007); The Franklin Abraham, Andrew Kreps Gallery, New York, NY (2005); and In the Public Realm: Sixteen Scenarios, Public Art Fund, Brooklyn Public Library, Brooklyn, NY (2002).

This exhibition is presented in collaboration with the New York Comedy Festival.