An installation and dance perfromance by Harrison Atelier 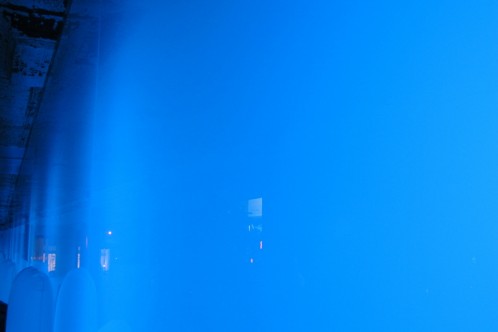 The very ideas underlying Pharmacophore: Architectural Placebo epitomized the unique intersection HAt occupies-where art meets science, technology and medicine, and the real and the imagined become a highly nuanced blend. The title of the project represents the composite figure of two medical terms. Pharmacophore is used by doctors and drug researchers to describe any family of similarly-shaped molecular structures that interact predictably with a particular biological target. Placebo effect is a beneficial change in a biochemical state, temporary and unreliable, produced in anticipation of therapy. The interaction of the two assumed a beguiling complexity. Placebo effects are augmented by marketing campaigns, social ambition, quests for scientific success as well as the institutional apparatus of white coats, prescription labels and medical instrumentation. Often the appearance of side effects can trigger the placebo effect of an otherwise inefficacious drug. Sometimes a placebo effect can be caused by a diagnosis. Where, then, is the line between pharmacophore and placebo? What are our cultural placebos, the conventions and assumptions on which we rely every day? Is medicine itself one such placebo-pharmacophore? Having taken these questions as conceptual touchstones, Pharmacophore: Architectural Placebo was HAt’s exploration of the cultural and philosophical economy that surrounds medicine, technology, and the human prospect in the 21st century.

Referencing the pharmaceutical company façade and the radiological suite, the installation consisted of 24 eight-foot-tall, tempered glass plates, supported by stainless steel framing and backlit blue, placed against along the back wall of the gallery. Contoured seats, suggestive of medical apparatus, were integrated into the installation pieces, which were dotted with inflatable forms that when unfurled became spatializations of pharmacophores. The inflatable set pieces were used as costumes and props; audience members used them as cushions. In the interaction among design objects, dancers, spectators and set, the performance, following Riener’s choreography, highlighted the shared desires that prompt our cultural placebos-even as the set pieces were contorted into placebo-effects as specific and numerous as the audience members themselves.

The piece is the third installment in HAt’s Pharmacophore series of design-dance hybrids. Catherine Miller choreographed the previous iterations in late 2010.  In this version of Pharmacophore, Ariane Lourie Harrison’s installation incorporated set and costumes, having transformed the entirety of the Storefront gallery into a pharma-cultural landscape. The project contained an original lighting design by Aaron Copp and Nick Houfek and an original score by Loren Dempster.

Harrison Atelier  (HAt) is a New York-based design firm. The practice operates along a broad spectrum defined by its two founding members’ respective backgrounds: Ariane Lourie Harrison is a designer and educator, who has taught at the Yale School of Architecture since 2006. She holds a PhD from NYU and an MArch from Columbia. Seth Harrison is a designer and biotechnology entrepreneur. He holds MFA, MBA and MD degrees all from Columbia. At the intersection of the Harrisons’ professional spheres, HAt develops design, writing and performance projects that explore the impact of technology on culture. Previous dance collaborations include ANCHISES (2010) with Jonah Bokaer, a work employing an altered plot line from the Aeneid that investigates a theme the Harrisons term “the ecology of aging.” HAt created the dramaturgy and visual design for ANCHISES, which the New York Times recognized as one of the Ten Best Dance Works of 2010.

Silas Riener  (choreographer and performer) grew up in Washington DC. He graduated from Princeton University with a degree in Comparative Literature and Creative Writing. He has worked with Chantal Yzermans, Takehiro Ueyama, Christopher Williams, Jonah Bokaer, and Rebecca Lazier’s TERRAIN. In 2010 he premiered NOX, a collaboration with poet Anne Carson and choreographer Rashaun Mitchell, with whom he continues to develop new projects. He joined the Merce Cunningham Dance Company in November 2007. While performing with MCDC, Riener completed his MFA in Dance at NYU’s Tisch School of the Arts.

Rashaun Mitchell  (performer) was born in Stamford, Connecticut, and raised in Atlanta, Georgia. He started dancing at Concord Academy in Massachusetts and graduated from Sarah Lawrence College in 2000. He received the Viola Farber-Slayton Memorial Grant from the Foundation for Contemporary Performance Arts in 2000. Since then he has danced with Pam Tanowitz, Chantal Yzermans, Donna Uchizono, Risa Jaroslow, Sara

Rudner, and Richard Colton. He joined the Merce Cunningham Dance Company in January 2004 and is currently on faculty at the Cunningham Studio. In 2007 he was the recipient of a Princess Grace Award: Dance Fellowship. His choreography has been presented at the Skirball Center (New York), La Mama (New York), Mount Tremper Arts (New York) and The Institute for Contemporary Art (Boston).

Melissa Toogood  (performer) is currently a member of the Merce Cunningham Dance Company. She began working with Merce as a member of the CDF Repertory Understudy Group in 2005. A faculty member at the Merce Cunningham Studio since 2007, she has taught repertory workshops in her native city of Sydney, Australia, and at the Cunningham studio in New York. Melissa works with Pam Tanowitz, Miro Dance Theatre, was a founding member of Michael Uthoff Dance Theatre and performed with writer Anne Carson. Melissa earned a BFA in Dance Performance from New World School of the Arts, Miami, FL under Dean Danny Lewis.

Loren Kiyoshi Dempster (composer) uses a combination of computer, electronics, field recordings, cello, improvisation, notated scores and world music influences to create and perform music. He has performed with Dan Joseph Ensemble, Trio Tritticali, String Power, Spontaneous River and Left Hand Path, among many others. His compositions for music and movement have been presented at The Stone, Roulette, Issue Project Room, North River Music, Wesleyan College and at Chez Bushwick, a 2007 Bessie Award-winning performance arts space in Brooklyn of which he is a founding member. He has toured extensively with Merce Cunningham, and he played John Cage’s solo cello work “One8” for the dance “Interscape.” Ever interested in the relationships between movement, space and sound, Dempster creates or performs music for many choreographers including Chris Ferris, Jonah Bokaer, Project Limb and Stochastic Ensemble in 2010.

Aaron Copp’s  (lighting designer) travels as a lighting designer have taken him to hundreds of theaters in more than 30 countries, from opera houses in European capitals to tents in the sand dunes of Rajasthan. His recent projects include lighting designs for Natalie Merchant, Yo-Yo Ma, Philip Glass and Laurie Anderson. Copp designed the critically acclaimed Kennedy Center revival of “The Glass Menagerie,” directed by Gregory Mosher and starring Sally Field. He has also designed frequently at the Old Globe Theater in San Diego and recently received a San Diego Theater Critics Award for Joe Hardy’s production of “Bus Stop.” He has worked extensively in the dance world, most recently

receiving his second Bessie Award for Jonah Bokaer’s “The Invention Of Minus One.” Copp had a long association with Merce Cunningham, designing such pieces as “Ground Level Overlay,” “Windows” and “Biped,” for which he also won a Bessie. He holds an MFA from the Yale School of Drama and a BA from SUNY-Binghamton.