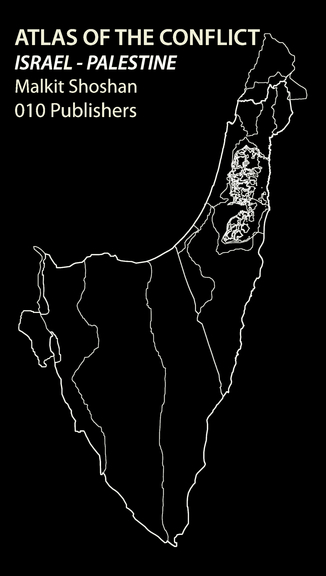 ATLAS OF THE CONFLICT by MALKIT SHOSHAN

Storefront for Art and Architecture is pleased to invite you to our first edition of the Productive Disagreement Series on Tuesday, Nov 16th, 7pm with the book launch of “ATLAS OF THE CONFLICT” (010 Publlishers) by Malkit Shoshan.

The first act of the evening will start with a book presentation by the Author followed by commentaries by Andrew Herscher and Jane Harrison. The second act will consist on a public discussion with representatives of Israeli and Palestinian lobby groups, Adam Horowitz and Ethan Heitner moderated by Henk Ovink and Eva Franch.

About the book: The Atlas of the Conflict (010 Publishers, 2010) maps the processes and mechanisms behind the shaping of Israel-Palestine over the past 100 years. Over 500 maps and diagrams provide a detailed territorial analysis of the Israeli-Palestinian conflict, explored through themes such as borders, settlements, land ownership, archaeological and cultural heritage sites, control of natural resources, landscaping, wars and treaties. A lexicon, drawing on many different information sources, provides a commentary on the conflict from various perspectives. As a whole, the book offers insights not only into the specific situation of Israel-Palestine, but also into the phenomenon of spatial planning used as a political instrument.

About the Author: Malkit Shoshan , (Haifa, 1976) is an Israeli architect. Shoshan is the founder and director of the Amsterdam based architectural think tank FAST (the Foundation for Achieving Seamless Territory). Their research explores and highlights the relations between architecture, planning, politics and activism in Israel/Palestine, Georgia, Afghanistan, Iraq, Kosovo, and the Netherlands. Shoshan is currently developing her Phd dissertation at Tu Delft. Her work has been published and exhibited internationally in magazines such as Volume or Abitare or venues such as the Venice Architecture Biennale, the Venice Art Biennale or the Rotterdam Biennale.

Ethan Heitner is a cartoonist and student at School of Visual Arts, and has been working with Adalah-NY: The Campaign for the Boycott of Israel since 2007.

Adam Horowitz is a writer and co-editor of Mondoweiss, a news website devoted to covering American foreign policy in the Middle East, chiefly from a progressive Jewish perspective. He holds a Master’s degree in Near Eastern Studies from New York University, and is a co-editor of the upcoming book The Goldstone Report: The Legacy of the Landmark Investigation of the Gaza Conflict (Nation Books).

Atlas of the Conflict

This event is possible thanks to the generous support by the Mondriaan Foundation.

The Productive Disagreements Series is part of Storefront’s programming for the development of conversations between ideologically opposed institutions, artist or architects reflecting on contemporary issues around the globe. The events avoid compromise and agreement as a methodology of dialogical exchange, promoting confrontation and dialogue in order to generate a responsive audience and increase participation obtaining a multiplicity of viewpoints and strategies.