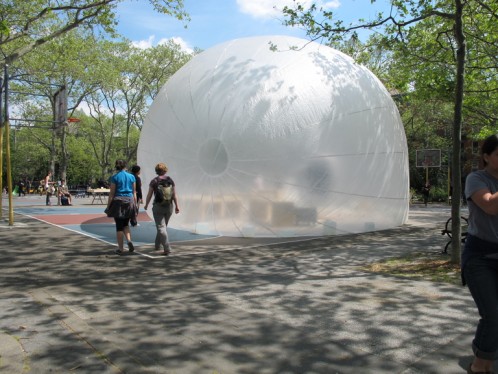 Storefront for Art and Architecture has sent the Spacebuster, a mobile inflatable structure designed by Raumlabor in 2009 and commissioned by Storefront  to transform public spaces of all kinds into points for community gathering, to Flint & Detroit, Michigan to take part of a larger initiative, Congress for Urban Transformation, a six-week practice-based program culminating in a conference on processes of urban restructuring.

Halfway between New York and Flint, the Spacebuster stops in Braddock, the small steel town outside of Pittsburgh, where Mayor John Fetterman has been using art to stimulate the local economy. Flint Public Art Project joins UnSmoke Artspace, Mayor’s Office, DJ Chevy, and Kevin Sousa, Pittsburgh’s up-and-coming star chef, of Salt of the Earth and Union Pig and Chicken, to serve up barbecue from what will be Braddock’s first and only restaurant, opening in the coming year. The event is a celebration of public space in an open lot at the center of town.

September 14, 2012 from 7pm-11pm on the lawn at the corner of Second Avenue and Saginaw Street in downtown Flint.

How can abandoned buildings and vacant land recover value when traditional economic development tools fail? In Flint and in cities around the country, residents have turned the devluation of property into opportunities for new uses, values, and ways of living in the city. Andrew Herscher and Etienne Turpin, architecture theorists from University of Michigan in Ann Arbor, and resident architect Andrew Perkins, of the Spencer’s Art House project, engage in a discussion about urban transformation and ruins, followed by projections by District VII, immersing guests in 3D images as electronic music pulses.
Sep. 21, Detroit Design Festival. From 5-9pm. The MIES Storefront, 1565 East Lafayette, Detroit.
District VII will occupy the SPACEBUSTER space with multiple projection and video projects. A panel discussion will begin at 6pm and conclude at 8pm.
Oct. 12, Artwalk, 120 E. First Street, Flint, MI 48502.
For the October Artwalk, Windsor-based veterans of the Detroit electronic music scene Kero and Annie Hall install projection mapping work onto the Genesee Towers, Flint’s infamous 19-story condemned building-the tallest in the city-now slated for demolition in a controversial agreement with Uptown Reinvestment Corporation. Part urban intervention, part design charrette, Flint Public Art Project leads off the event with a discussion spearheaded by Jerome Chou on the fate of the site and possible future uses, in collaboration with Uptown, followed by music and dancing with projections.

Interventions:  Flint community groups and visiting artists and
designers present the results of their collaborations