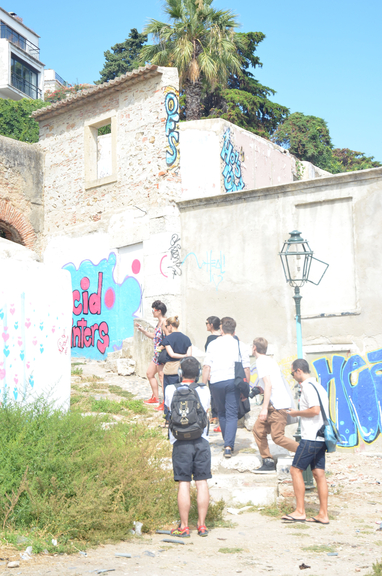 The industry of tourism can be understood in four different ways: first, as the most successful educational project for contemporary middle class masses; second, as a strategy for historical preservation in a time where the lust for loss in a fast information based society is more valuable than ever; third, as a tool for the construction of value; and finally, as the biggest plague and obstacle in the development of a city towards its own future. The Disneyfication of cities is a contemporary phenomenon that freezes with suspicious ideals the changing body of the city and its citizens. This Walking Series invited a group of individuals to offer a guided tour through a spontaneous walking drift in order to understand another view of the city of Lisbon, it’s value and its future.

Walking Series events is an event in transition that invites individuals familiar and foreign to the explored territory to lead a walking exercise through the streets or paths of a certain city or territory. Borrowing from guided tours and derives, the Walking Series unveils latent realities by real time experience.