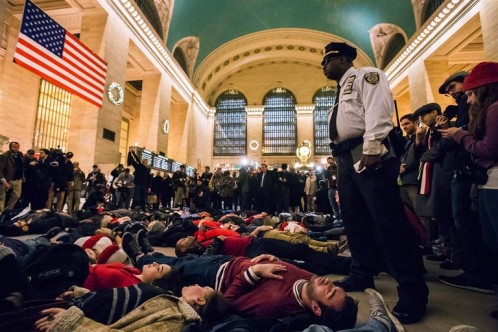 A. Clary/AFP/Getty Images. Protestors lay down in Grand Central Station during a protest.

Militarized Metropolis – the Life and Death of Public Space

In the era of Occupy, clashes between the public and the police have become routine civic encounters in the downtowns of New York, Hong Kong, London, Istanbul, Athens, Madrid, and many other global cities. These protests followed the tumultuous months of civil disobedience in the central squares and streets of cities involved in the Arab Spring: Cairo, Tunis, Manama, and Tripoli.

In the US, media attention has been sparked by recent protests in Ferguson, Missouri in response to the murder of unarmed black youth Michael Brown by a white police officer. Protests were greeted with the brute force of armed National Guard, state troopers, and local police. In New York, the death of Eric Garner at the hands of the NYPD inspired indignation and public outcry in the form of marches and gatherings in downtown Manhattan.

Revolutionary Frantz Fanon observed in the mid 20th century that institutions of education, work, church, and family maintained the moral order of capitalist society, which in turn lightened the task of policing. At the same time, in Europe’s colonies, the policeman and the soldier served as “instituted go-betweens, the spokesmen of the settler, and his rule of oppression.” The police and the soldier maintained contact with the native and advised him “by means of rifle butts and napalm not to budge.”

How do we make sense of increased violence the public spaces of our cities? Does the escalation of a militarized police enact the will of the state’s power, and if so, for whom and against whom? Do the surveillance apparatuses of CCTV cameras, bollards, metal safety barriers, guard booths, and a host of other architectures of security move beyond securitization to deaden civic protest? Is the protest tactic of the “die-in” emblematic of a militarized public space?

Join us for our first Storefront Salon to discuss the intersections between urban violence, public space, civic protest, and the security state in our cities today.

Bayeté Ross Smith is an artist, photographer, and educator living in New York City. He began his career as a photojournalist with the Knight Ridder Newspaper Corporation. Bayeté has exhibited widely at many prominent arts and cultural institutions. His collaborative projects “Along The Way” and “Question Bridge: Black Males” have shown at the 2008 and 2012 Sundance Film Festival, respectively. His work has also been featured at the Sheffield Doc Fest in Sheffield England, the Unseen Photo Fair in Amsterdam the Netherlands and the L.A. Film Festival. He has also been involved in a variety of community and public art projects with organizations such as the Jerome Foundation, BRIC Arts Media, The Laundromat Project, Alternate Roots, the city of San Francisco, the Hartford YMCA and the San Francisco Municipal Transit Agency.

His photographs have been published in numerous books and magazines, including Dis:Integration: The Splintering of Black America (2010), Posing Beauty: African American Images from the 1890s to the Present (2009), Black: A Celebration of A Culture (2005), The Spirit Of Family (2002); SPE Exposure: The Society of Photographic Education Journal, Black Enterprise Magazine, and Working Mother Magazine.

As an educator, He has taught on the collegiate level and mentored youth through community based art programs. He has worked with the International Center of Photography, New York University, Parsons, the New School for Design, the California College of the Arts, and numerous K-12 and college level courses. Bayeté is currently the Associate Program Director for KAVI (Kings Against Violence Initiative), a violence prevention non-profit organization in New York that has a partnership with Kings County Hospital in Brooklyn.

Mabel O. Wilson is an award winning designer, scholar, and educator. Her collaborative design practices (KW: a and Studio &) have worked on speculative and built projects. The (a)way station, in the collection of SFMoMA, received a design award from ID Magazine and has been exhibited widely. Her practice has been a competition finalist for several important cultural institutions including lower Manhattan’s African Burial Ground Memorial (with Dean Wolfe Architects) and the Smithsonian’s National Museum for African American History and Culture (with Diller Scofidio + Renfro.) The Wexner Center for the Arts, the Cooper Hewitt National Design Museum’s Triennial, Storefront for Art and Architecture, and SF Cameraworks have exhibited her installations. She is currently compiling the rich photographic archive from her book Progress and Prospects into an experimental exhibit and database as part of the Visible History Project. She is also developing an urban history database for use through mobile technologies by residents of Accra, Ghana.

Mabel is an Associate Professor of Architecture at Columbia’s Graduate School of Architecture Planning and Preservation. She teaches courses in architectural design, architectural theory, and visual cultural studies. Her seminars examine a range of subjects including raciality and architectural discourse; space and the politics of cultural memory and history; and theories of time, cinema and databases. Her architectural design studios utilize methods of parametric data-mining and visualization to explore urbanization, new technologies, and globalization in African cities and systems of aggregation and material expression. She received a doctorate in American Studies from NYU (2007), and an M. Arch from Columbia’s GSAPP (1991). As the Nancy and George E. Rupp Professor at GSAPP, she directs the program for Advanced Architectural Research, co directs the Global Africa Lab, and is a Senior Fellow at the Institute for Research in African American Studies in GSAS.

Her scholarly research investigates space and cultural memory in black America, race and visual culture, and new technologies and the social production of space. Her essays have appeared in numerous journals and books on critical geography, cultural memory, visual culture, and architecture. Her recent book, Negro Building – Black Americans and the World of Fairs and Museums, studies how the spaces of world’s fairs, emancipation expositions, and grassroots public museums became sites to imagine Afro-modernity.

About Storefront Salon and OfficeUS:

The first discussion of Storefront Salon will be ‘Militarized Metropolis – the Life and Death of Public Space’ facilitated by Mabel O. Wilson, Associate Professor of Architecture at Columbia University GSAPP, and Bayeté Ross Smith, Associate Program Director for KAVI.