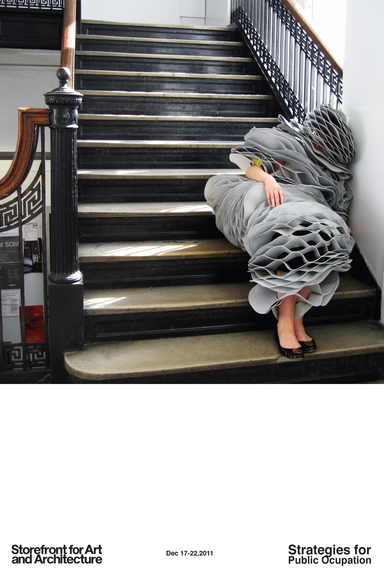 Strategies for Public Occupation was an exhibition of ideas that included seven days of discussions, events and perfromances.

On October 7, 2011, in response to the Occupy Wall Street movement, Storefront launched a  Call for Ideas  entitled “Strategies for Public Occupation” which invited submissions from architects, artists and citizens at large to offer their ideas for enabling acts of communication and action between the civil society and the structures of economic and political power. Gathering expertise from the various acts of civil occupation throughout the world during the last months and constrained to one image and one text of maximum 200 words, submissions ranged from the technical to the oneiric. With a prize equivalent to a  New World Order , Storefront received more than 100 submissions.

The exhibition presented the submissions delivered to the  Call for Ideas  and a 7-day marathon of talks, workshops and events brought together a creative force of experts, artists, architects and citizens at large to discuss the current state of affairs in relation to the Occupy movement around the world. The exhibition displayed proposals for spatial occupations for public demonstrations and actions in cities throughout the world, and the events aimed to identify the limitations and possibilities of tools of production and to rethink new ways of cohabitation. All projects submitted were available for browsing, consultation and distribution as part of the exhibition and on Storefront’s website and archive.

For details on the workshops and forums as part of Strategies for Public Occupation,  click here.

Storefront hosted an opening reception with a Manifesto Series on December 16, 2011 from 7-9pm.