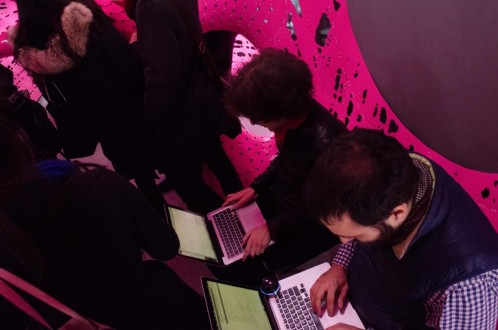 An evening of collaborative improvisations and solo intercessions performed by a group of sound artists, programmers and musicians form the New York Supercollider Meetup. From ethereal to cacophonous, performers presented a gamut of textural and tonal explorations of this unique sonic structure comprised of 8 audio channels running through 10 transducers resonating into “Situation NY,” Jana Winderen and Marc Fornes/THEVERYMANY’s site-specific installation.

The New York Supercollider Meetup is a monthly forum for learning and collaboration around music and sound art created using the Supercollider programming language. The group has been meeting for about 4 years, and is made up of sound artists, programmers, musicians and producers of various backgrounds. Anyone interested in Supercollider is welcome to join our group, from beginners to experienced practitioners.

Daniel Palkowski has been a New York based composer and performer since 1976. He has created content for Voyager, MacMillan Digital, Disney and Harper Collins among others. Performances worldwide. He has a CD, Electria (available wherever digital downloads are sold), and a vinyl, Asterism (1985). He has been a video and audio specialist at Ernst & Young since 1997, and composer/sound designer for the online Snidetv video series. His compositions regularly appear in concerts by Composers Concordance, and the International Street Cannibals.

Dave Britton is a neuroscientist working on brain-computer interfacing. In the past he has been CTO of Internet companies and developed business applications software. He collaborates with visual artist Jack Ox on the Virtual Color Organ project. He plays flute in Irish traditional music sessions, and plays shakuhachi for personal meditation. His current SuperCollider programming project uses his EEG brainwaves to interactively create music in real-time performance accompanying his playing acoustic wind instruments.

David Reeder is a media arts software developer who combines software design with music composition, sound invention and inter-media installations. He is co-organizer of NYC SuperCollider and author of Dansemuse, an effective, lightweight, easily configurable software library that translates movement into Open Sound Control messages. As a musician, David has performed at the Darmstadt Internationale Ferienkurse für Neue Musik and in New York including the Brooklyn College International Electro-Acoustic Music Festival. His compositions have been performed in cities around the US.

Nicholas Colvin is a musician, technologist and hacker, co-organizer of NYC Supercollider and Monthly Music Hackathon NYC. He is a percussionist as well as computer musician and synthesist, and performs with Gamelan Kusuma Laras at the Indonesian Consulate. In computer music, his primary focus is algorithmic composition and real-time improvisation using novel digital music interfaces.

About the installation: Situation NY

Reflecting on the contemporary conditions emerging between the digital and the physical realms, the collaboration of Winderen and Fornes collapses sound, light and form in an object with intrinsic sensorial behaviors, inviting visitors to question the properties of matter and the built environment surrounding us. The installation is a vibrating sound experiment that aims to transform the architecture into animated sensible form. Conceived as a sound object that absorbs and contrasts the site specificity of the Storefront Gallery with abstract, spatial, formal and acoustic variations and compositions, Situation NY raises questions about context, sensorial readings, estrangement and the uncanny tangentially resonating with contemporary debates around the ontology of objects.

With the support of