home • archive • The Absolute Restoration of All Things

The Absolute Restoration of All Things 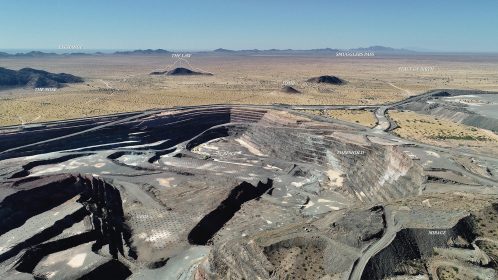 In the middle of the vast Sonoran desert in the northwest of Mexico, a sculpture sits within the deep pit of a decommissioned gold mine. Made on-site with soil from the pit, the sculpture is shaped as a perfect cube. Beside it sits a silver plaque that reads:

The decision of the Unitary Agrarian Court of the 28th District, issued on December 8th, 2014, obliges Penmont to return the extracted gold, which would take the shape of a 70 x 70 x 70 centimeter cube and would have a value of 436 million dollars.

The contrast in scales between the small volume of the sculpture in relation to the massive open pit clearly showcases the environmental damage caused by the mining industry. This sculpture and its accompanying plaque function as an anti-monument to the site’s dispossession. They are part of the exhibition The Absolute Restoration of All Things by artist Miguel Fernández de Castro and anthropologist Natalia Mendoza at Storefront for Art and Architecture.

For the last five years, Fernández de Castro and Mendoza—who are based in the Sonoran Desert—have been researching the 2014 court case that shut down Penmont’s mining operations. The lawsuit was brought to court by the “ejidatarios” (communal land holders) of the mining site, who claimed that their territory was illegally occupied and exploited, causing an irrevocable environmental impact on their land. In addition to the return of the extracted gold, the court ruled that Penmont Mining is “obliged to fully restore the ecosystem that prevailed in this place, with its hills, mountains, waters, air, flora, and fauna that existed before.” Not only has Penmont Mining not complied with the court ruling, but the ejidatarios continue to suffer from arbitrary imprisonment, harassment, and forced disappearance in a context of intertwined state and criminal violence.

The Absolute Restoration of All Things departs from the impossibility of this historic legal verdict to explore the issue of land rights and the limits of the legal language that protects it.

The exhibition at Storefront presents newly commissioned works by Fernández de Castro and Mendoza that unpack the court case, including a film, diagrams, a photo mural, and objects from the mine. The formwork used to create the rammed earth sculpture inside the open pit is also included, allowing the viewer to grasp the scale and connect the two sites. Together, these works present a panoramic picture of the expansive devastation caused by the mining industry, alongside the unattainable legal verdict that aims to restore this particular part of the Sonoran Desert.

Miguel Fernández de Castro (b. 1986, Sonora, Mexico) is a visual artist based in the Sonora-Arizona borderlands. Through photography, video, sculpture, and writing, his work examines how extractive and criminal economies materially transform a territory while looking at the historical ties between environmental catastrophe, smuggling routes, and forced disappearance. In Mexico, his work has been shown at Museo Jumex, Casa del Lago, and Museo de Arte Moderno. Internationally he’s presented work at Frac Centre-Val de Loire (France), Spazio Veda (Italy), Wren Library (UK), Museo Artium (Spain), Ashkal Alwan (Lebanon), among others. His film Grammar of Gates was selected by Ballroom Marfa to be for the Artists’ Film International program at Whitechapel Gallery in London. Since 2018 he has collaborated with multiple search groups documenting mass graves on both sides of the Mexico-US border.

​​Natalia Mendoza, (b. 1981, Mexico City, Mexico) is a researcher and essayist based between New York and Sonora, Mexico. She obtained a PhD in anthropology from Columbia University and joined Fordham University as an assistant professor. She has conducted extensive ethnographic research in the region of Sonora-Arizona. Her work examines the convergence of legal and illegal economies, and the overlaps between state and criminal violence in the US-Mexico borderlands. In 2020, Natalia Mendoza won the “José Revueltas-INBA National Essay Award” for her collection of essays on disappearance, funerary rituals, and political imagination.

The Absolute Restoration of All Things is presented as part of Building Cycles, Storefront’s ongoing curatorial program that examines building as both a place and a process. The Absolute Restoration of All Things follows five exhibitions in the cycle, Aquí­ vive gente, Ministry for All,  Arabesque, and Something Broke, and The Great Ruins of Saturn.

The Absolute Restoration of All Things by Miguel Fernández de Castro & Natalia Mendoza.  Graphic design by Estudio Herrera. Organized by Storefront for Art and Architecture, 2022.