The Great Ruins of Saturn 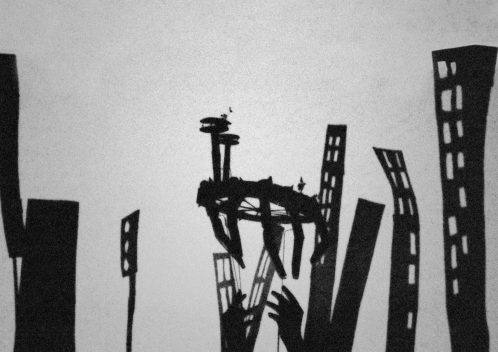 Still from The Great Ruins of Saturn by Alvaro Urbano, 2021.

Exhibition Opening:
Saturday, December 4th from 5-7 pm [RSVP]
Please note that the public opening is free and all are welcome to attend. Proof of vaccination will be required to enter the gallery space.

“There’s a great, big, beautiful tomorrow and it’s just a dream away!”
Song lyrics for the Carousel of Progress (1964)
by Richard & Robert Sherman, commissioned by Walt Disney

“Man’s Achievements on a Shrinking Globe in an Expanding Universe” stated the dedication of the 1964 New York World’s Fair, held at Flushing Meadows Corona Park – once a sprawling ash dump in the heart of the borough of Queens.

The 650-acre fair site was populated by hundreds of temporary structures and attended by 51 million people. Amidst all the attractions, the colossal New York State Pavilion, with its space age design and its boasting rights as the largest and tallest pavilion at the fair, embodied the spectacle of “man’s achievements” (or of those by certain men, such as Governor Nelson Rockefeller, World’s Fair President Robert Moses, and pavilion architect Philip Johnson).

57 years later, this once colorful symbol that sought to project the ultimate vision of progress, optimism, and power lies largely dormant. Its concrete vestige now casts shadows upon its surroundings…and its original vision. While other structures from the fair have been repurposed, rehabilitated, and moved to various sites, the New York State Pavilion, with its central structure known as the Tent of Tomorrow, still awaits its grand departure.

The Great Ruins of Saturn by artist Alvaro Urbano speculates upon its unknown future. Through the technique of shadow puppetry, Urbano presents a film and an installation that playfully and satirically resurface stories from the Tent of Tomorrow and its politically and socially charged past. Urbano’s work situates the neglected pavilion in a theater occupied by a cast of inanimate characters, bringing them to life in order to question both obsolete and contemporary notions of growth and development.

Untethered from its original site, the building relinquishes the bright lights of achievement and instead seeks an otherworldly ending. In the process, it escapes the shadows formed by the still-thriving promises of a techno-capitalist future.

Alvaro Urbano (b. 1983, Madrid, Spain) is a visual artist based in Berlin. He studied at the Escuela Técnica Superior de Madrid (ETSAM) and the Institut für Raumexperimente of the Universität der Künste in Berlin. He is currently a professor at the École Nationale Supérieure des Beaux-Arts in Paris. Urbano’s practice embraces a variety of media, from performance to spatial installations that unfold throughout an experimental process. Often using architecture, theatre, and heterotopia as points of departure, his work invites dialogue in newly conceived environments – exposing conflicts between reality and fiction that redefine and render time-space based situations. Recently, his work has explored and researched the futures of abandoned and vacant World’s Fair pavilions, as in his 2020 show The Awakening at La Casa Encendida (Madrid), which animated the 1958 Spanish Pavilion in Brussels. The Great Ruins of Saturn is Urbano’s first solo exhibition in the U.S.

The Great Ruins of Saturn by Alvaro Urbano. Graphic design by Estudio Herrera. Organized by Storefront for Art and Architecture, 2021.

The Great Ruins of Saturn is presented in collaboration with Acción Cultural Española (AC/E), as well as with the support of Silman, ChertLüdde, Travesía Cuatro, and Sotheby’s. Lighting design is supported by L’Observatoire International, with contributions from Lutron / KETRA, Lumenture, and O’Blaney Rinker Associates.