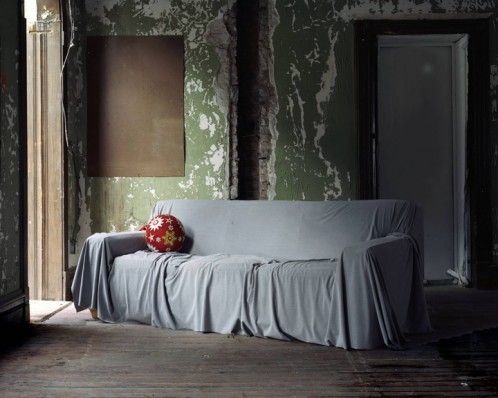 Storefront for Art and Architecture is proud to present VISIONS, a project that brought 5 photographers from around the world to construct a vision of a building.

The inaugural VISIONS project took as its subject of investigation the location of Storefront’s 30th Anniversary Spring Gala: 5 Beekman, known to many as Temple Court.

Each photographer was asked to produce a series of prints that unveil and construct a different reality of the building.

These photographs were displayed at Storefront’s 30th Anniversary Gala on March 1st inside 5 Beekman.

Brett Beyer  is an architectural and fine art photographer based in Brooklyn, New York. He received his degree in studio art from Bard College in 2000. His photographs were recently published in a five page photo essay by the New York Times Magazine. Some of his architectural clients include Cornell AAP, OMA, SOM, and Storefront for Art and Architecture. His group exhibitions include “Aerial Interior” at the International Photography Awards Best of Show exhibit at Smashbox Studios in Los Angeles, California. In 2012 he was included in the photography awards publication American Photography 28. He is currently working on an aerial photography project documenting the construction of the new World Trade Center in lower Manhattan.

Cameron Blaylock  is a photographer and artist living in Brooklyn, NY. In 2010, Cameron received a European Diploma in Fine Arts from Bauhaus-University in Weimar, Germany. For more visit: cameronblaylockphoto.com/ cameronblaylock.com/

Dolan Morgan lives and writes in Greenpoint, Brooklyn, where he is an editor at The Atlas Review. His Pushcart Prize nominated fiction and poetry can be found in The Believer, The Collagist, Field, Pank, The Lifted Brow and Red Lightbulbs, among others. His work mythologizing airplane hijackings is featured in the online documentary project, Fortnight Journal, and his book experiment, Google Place Reviews, blindly donates all proceeds to the streets, wilderness and trash. For more visit: www.dolanmorgan.com.

Details of a magnificent business , 2013

Companies which may become tenants, 2013

Naho Kubota  is a photographer whose work has been shown in exhibitions including her most recent show at Visual Arts Gallery in Chelsea, solo show at The Art Complex Center of Tokyo, Japan. She was the finalist of powerHouse Books New York Photo Festival and PDN 30 nominee, and the winner of American Photography 24.

Benoit Pailley  lives and works New York and Paris. He is inspired by contemporary art and his passion is reflected in his elegant still life and installation photography. The objects become “works of art” in an environment that recreates gallery spaces. When conceptually appropriate, he builds installations that frame the objects in unique and stunning ways.

His first solo exhibition, Passport, was presented at the Flux Foundation in Geneva in March 2008. He is a regular contributor to Sleek and Double magazines and won German’s Lead Award in 2006 for best photographer in Still Life/Architecture category.