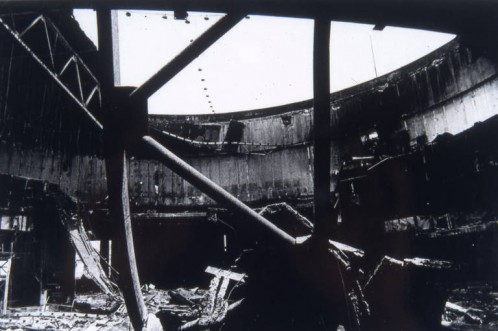 Warchitecture-Sarajevo: A Wounded City was an extensive multi-media exhibition documenting the destruction of architecture in Sarajevo through photographs, films, audio-tape and personal testimony. Created by the Bosnia-Herzegovina Association of Architects (Das-Sabih) in Sarajevo between May 1992 and October 1993, Warchitecture described the combined physical and psychological assault against the civilian population by presenting one of the main forms of aggression: the destruction of the city’s architecture. On March 16, 1994, five members of Das Sabih—Midhat Cesovic, Borislav Curic, Nasif Hasanbegovic, Darko Serfic and Sabahundin Spilja—escaped the city with the exhibition packed in two crates. In the following months, they used the materials collected to inform the general public and the design community about the degeneration of Sarajevo, and to begin a process of planning for the reconstruction of the city.