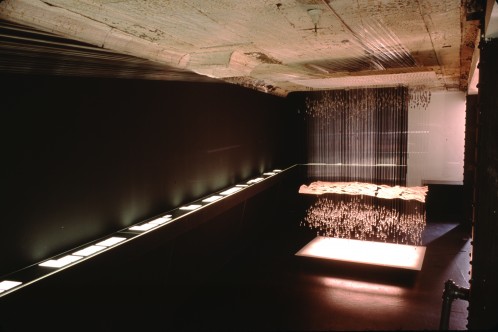 Designed to float along the California coastline, Wave Garden, a proposed 480-acre membrane made of 11,734 piezoelectric tiles, was intended to function as an alternative power plant Monday through Friday, oscillating with the ocean waves and generating energy. During the weekends, Wave Garden would be transformed into a publicly-accessible landscape whose availability to the public would be inversely proportionate to the consumption of electricity during the week. Zones of the power plant’s surface would be lifted above the surface of the ocean, and the flexible membrane transformed into a stable platform for recreational use. The exhibited model was a four foot by six foot membrane composed of over 1,800 plastic panels, suspended by a system of over 3,000 counterweights hovering four feet above the floor. This was the first solo exhibition of Obuchi’s work.