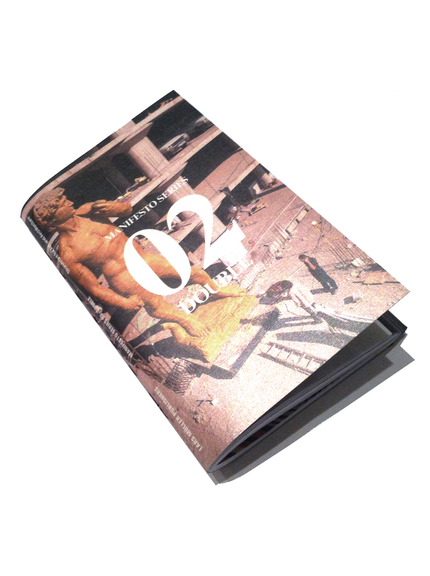 DOUBLE is the second publication to be born out of Storefront’s Manifesto Series. DOUBLE includes a group of artists, architects, critics, historians and theorists, discussing the effects, desires and implications in the act of doubling, replicating or copying. Storefront’s ongoing Manifesto Series is an event based encounter that intends to develop and expose fresh and new ideas in a short and precise manner. The purpose of the Manifesto series is to encourage the formulation of positions in relation to specific topics and instigate spirited discussion and exchange in a dynamic and polemical context.  The events aim to reinvigorate and reinvent the manifesto format as a way of exchanging ideas, compelling participants to denounce a certain past or present condition, proclaim an alternative present, past or future situation and indicate a strategy or method of action. This publication is a matured version of the manifestos presented at Storefront for Art and Architecture on March 6th, 2012 on the occasion of the arrival to New York of David (inspired by Michelangelo), a double-size, golden replica of Michelangelo’s David by conceptual artist Serkan Özkaya with a transcript of several conversations around three paella dinners (Socarrat Series).

Society has constantly regulated the act of copying. Almost as an instinctual impulse towards originality, the desire and need for constant innovation has been protected and regulated throughout history by public shame, bureaucratic forms or even trials. While copying constitutes the early stage of any learning process, contemporary advanced forms of creation are invested in the definition of taxonomies and development of tools to apprehend preexisting forms as the first step towards contemporary modes of production that are more incisive in responding to contemporary issues. The production of sameness and difference is the issue at the very core of this publication. This compilation of manifestos explodes the understandings, potentialities and possibilities embedded in the act of copying opening a path for learning by copying, and ultimately copying better.

Learn more about  Manifesto Series: DOUBLE  which took place at the Storefront gallery in 2012.

Serkan Özkaya (Editor) is a contemporary conceptual artist whose work deals with topics of appropriation and reproduction, and typically operates outside of traditional art spaces. Özkaya’s latest works include One and Three Pasta (with George L. Legendre), for which the duo created mathematical equations and 3D computer models for 92 types of pasta; and David (inspired by Michelangelo), at two-times the size of the original piece by Michelangelo. Özkaya is the author of nine books, including Today Could Be a Day of Historical Importance

Christopher Eamon is an independent curator and writer. He is the former Director of the New Art Trust, and was previously curator of Pamela and Richard Kramlich Collection, San Francisco. He has worked as an assistant curator at the Whitney Museum in New York and has curated shows of video and new media art at PS1/MoMA, ICA London, and SFMoMA, among others. Exhibitions include Silent Treatment (1999) and Bill Viola: The Crossing (1999), Aspen Art Musem;Video Acts: Single-Channel Works from the Collections of Pamela and Richard Kramlich and New Art Trust (2002-2003), PS1 Contemporary Art Centre, New York, and ICA, London; Beyond Cinema: The Art of Projection 1963-2005 (2006), Hamburger Bahnhof Museum for Contemporary Art, Berlin; A Rictus Grin (2008), Broadway 1602, New York; and Accidental Modernism (2008), Leslie Tonkonow Artworks + Projects, New York. Eamon’s publication projects include Anthony McCall: The Solid Light Films and Related Works (2005), Northwestern University Press, Evanston, and Steidl, Germany; Film and Video Art (2009), Tate Publishing, London; and Art of Projection (2009), Hatje Cantz, Ostfildern.

Cristina Goberna is a master fencer, architect and faculty member at the Graduate School of Architecture, Planning and Preservation (GSAPP) at Columbia University. Overall, she and Urtzi Grau together orchestrate Fake Industries Architectural Agonism with Urtzi Grau, an architectural office of variable humor and questionable taste that explores the power of replicas; that is, the potential of copies and positive disagreements as engines for the advancement in the field.

Alanna Heiss is the Director of ARTonAIR.org and the Clocktower Gallery. She was a leader of the early 1970ʼs alternative spaces movement in New York City. She founded the legendary Clocktower Gallery in 1972, and P.S.1 Contemporary Art Center in 1976, where she served as Director until 2008. Heiss has organized over 700 exhibitions at P.S.1 and in art spaces around the world, including Rooms (1976); New York, New Wave (1981); Greater New York (2000 and 2005), and Arctic Hysteria (2008). Among her numerous publications are catalogues of the work of Janet Cardiff, Dennis Oppenheim and Michelangelo Pistoletto.

Spyros Papapetros is an Assistant Professor of history and theory of architecture at Princeton University. He is an art and architectural historian and theorist whose work focuses on the historiography of art and architecture, the intersections between architecture and the visual arts, as well as the relationship between architecture,psychoanalysis and the history of psychological aesthetics. He is the author of On the Animation of the Inorganic: Art, Architecture, and the Extension of Life (University of Chicago Press, 2012) and the editor of Space as Membrane by Siegfried Ebeling (AA Publications, 2010).

Hrag Vartanian is a Brooklyn-based writer, editor and art critic who has written extensively about street art, performance art, the internet and issues of multiculturalism. He is editor of Hyperallergic and a member of the Triangle Arts Association Board. He tweets a lot.

Ines Weizman is an architect and theorist. She has taught at the Architectural Association, Goldsmiths College in London, Berlage Institute of Architecture in Rotterdam and currently teaches at London Metropolitan University. She researches and publishes on the ideological spectacles enacted by Soviet-era architecture, particularly on the urban historiography of East Germany. Her recent project for an architectural re-enactment of Adolf Loosʼs 1927 House for Josephine Baker in Paris is conceived as an excise in critical appropriation and radical copying. Together with Sam Jacob, she is currently directing a research cluster at the Architectural Association on Architectural Doppelgangers.

Architectural Agonism, a conglomerate orchestrated in collaboration with Cristina

Goberna from their headquarters in New York and Barcelona.

Pedro Gadanho is an architect, curator and writer. He is the curator for contemporary architecture at the Department of Architecture and Design at MoMA, New York. He was the editor-in-chief for Beyond, Short Stories on the Post-Contemporary and is the author of Arquitectura em Público (Dafne, 2011).

He has taught at the Oporto Faculty of Architecture and was the Co-Director of ExperimentaDesign from 2000-2003. He was the curator of international shows such as Space Invaders, for the British Council, London, and Pancho Guedes, An Alternative Modernist, for the Swiss Architecture Museum, Basel.

Since the mid 1970s, Béar has created an intriguing body of work that brings attention to communications issues with a specific focus on the use of media by the press and the disempowered role of the public in communications policy. Central to Béar’s work is a desire to tie the means of production (technology) to the reasons for production (capitalistic advantage, national ideology, etc.). While Béar’s concerns are global, her approach is always personal and experimental, collapsing the norms of narrative and documentary, subjective authorship and objective document.

Lynne Tillman is a novelist, short story writer, and cultural critic.She is currently Professor/Writer-in-Residence in the Department of English at the

University at Albany and is the author of five novels, three collections of short stories, one collection of essays, and two other nonfiction books.

Michael Morris is an artist, conservator and expert on stone preservation with the Metropolitan Museum of Art. He worked extensively on restoring Tulio Lombardiʼs Adam and at Sardis and Samothrace excavation sites in Turkey and Greece for 20 years. Morrisʼs work has been featured at the Drawing Center and Caprenter Center for the Visual Arts at Harvard University, among others. His long term collaboration with fellow artist Huseyin Alptekin has been exhibited widely, such as at the International Istanbul Biennial.

Eva Franch i Gilabert is the Director of Storefront for Art and Architecture in New York. A registered architect, researcher, curator, and teacher, founder of OOAA (office of architectural affairs). Franch studied at TU Delft, at ETS Arquitectura Barcelona, and Princeton University. She received the La Caixa Fellowship for postgraduate studies, the Suzanne Kolarik Underwood Prize and the Howard Crosby Butler Fellowship from Princeton University, the FAD Prize for Emerging Architects, a Pasajes-iGuzzini Prize, and a Dragados Foundation Prize. She has also been a fellow at Schloss Solitude. Franch’s work has been exhibited at the Center for Architecture in New York, Korean Institute of Architects in Daegu, FAD Barcelona, NAI Rotterdam, the Shenzen Biennale of Architecture, SOA Princeton, COAR Rioja, and ETSA Barcelona. Franch has taught at the University of Buffalo and at Rice University, and has been a juror, visiting critic and lecturer in the United States, South America, Australia, the Middle East, Asia, and Europe.