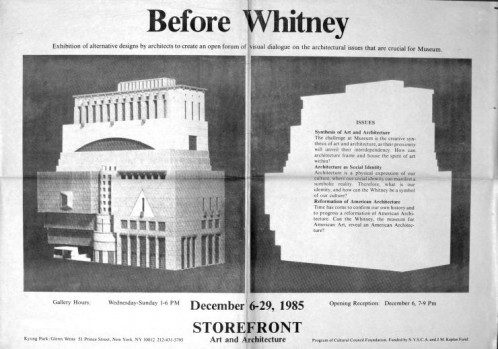 The controversial addition to the Whitney Museum proposed by Michael Graves in 1985 presented an opportunity to investigate critical issues relating to the tradition of American architecture and the relationship between art and architecture. Storefront invited artists and architects to submit their visions of the Whitney Museum in the form of a drawing or model to create a visual forum for discussing these fundamental questions. The proposals addressed the challenge of a museum to creatively synthesize physical structure with the works that are on display. How can architecture frame and house the spirit of the art within, and how could the new design for the Whitney, as the Museum for American Art, reveal a specifically American architecture? Among the 70 respondents were Christo, Todd Ayoung, Eugene Tsui and Carolee Schneemann.