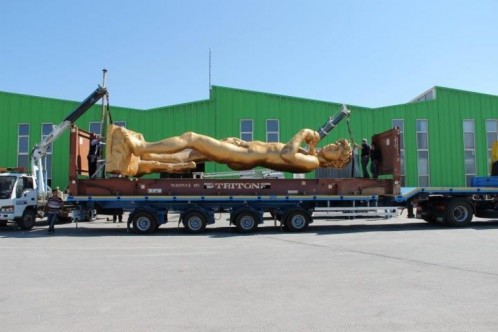 Conceptual artist Serkan Ozkaya made David (inspired by Michelangelo), a double-size, golden replica of Michelangelo’s David, for the 9th International Istanbul Biennial in 2005. Based on Stanford University professor Marc Levoy’s computer model, Ozkaya’s sculpture was constructed by six people over the course of six months.  Days prior to the opening of the Biennial, the sculpture collapsed shortly after installation. After the collapse, the artist restored the damaged replica and cast two additional copies, one that remains in Turkey and one of which has been recently acquired by 21c Museum in Louisville, Kentucky.

The museum traveled the sculpture throughout the city for its New York debut on the morning of March 6th, and it arrived at the Storefront Gallery via a lowboy trailer in the afternoon. The work was on view outside Storefront for Art and Architecture until 9pm.