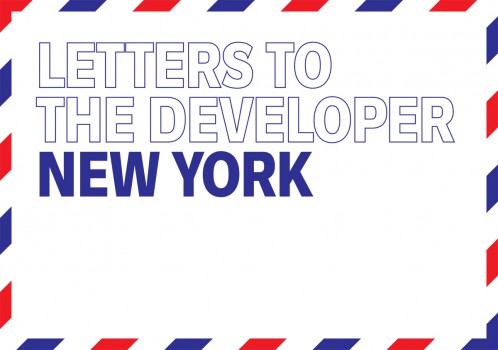 In 2014, Storefront launched Letters to the Mayor, a project that invited architects to write letters to their city mayors as a way to open up dialogue about the making of cities and public life.

In the fall of 2016, Storefront launched Letters to the Developer in New York City.

Letters to the Developer: As part of this project, a select group of architects, curators, historians, and critics have each  been asked to write a letter to a New York City-based developer who should be recognized for making a positive contribution to public life. The letter articulates one exceptional act that the developer has carried out; an act that goes beyond common practice and that participants believe should become part of the norm.

The letters, as a collection, attempt to recognize the great achievements of developers in New York City by presenting a factual representation of the highest possible standards for development. Dwelling upon past and present achievements, the project aims to raise the level of awareness and recognition of acts that can help to inspire better development practices in New York City, and subsequently around the globe.

The letters were exhibited at Storefront’s gallery space in New York from October 5th to October 20th as part of the exhibition Work in Progress, which showcased alternative visions for New York City development projects, as well as a photographic survey of active construction sites throughout the city.

This edition of Letters to the Developer is the premiere in an open and ongoing series of iterations of this project. To propose an edition in your city, please contact info@storefrontnews.org.