Public Space In A Private Time 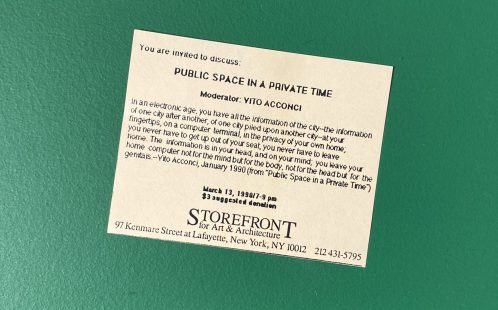 The establishment of certain spaces in the city as “public” is a reminder, a warning, that the rest of the city isn’t public.
— Vito Acconci, 1990

On the occasion of the gallery’s 40th anniversary, Public Space in a Private Time: Building Storefront for Art and Architecture connects our focus on the built environment with New York City’s social and political challenges at the time of its founding in 1982. Through a close reading of early shows and projects, the exhibition showcases the leading role Storefront has played in the defense of public space through artistic practice.

Using our own archive as its main resource, Public Space in a Private Time foregrounds Storefront’s early preoccupation with the dominance of private interests in the public sphere, as well as with the accelerated pace of urban development, gentrification, and displacement. All these issues were of deep concern in New York City during those years, and continue, urgently, to require attention today—both here and around the world.

Taking its title from an essay presented at Storefront in 1990 by artist Vito Acconci, the exhibition highlights the role this organization has long played in positioning art and architecture at the center of public life. It focuses on key exhibitions, competitions, and open calls that have been instrumental in the shaping of Storefront’s ethos, and includes a section about the making of the iconic facade by Acconci and architect Steven Holl from 1993, which continues to embody our mission as an enduring public artwork in Lower Manhattan.

The exhibition Public Space in a Private Time is presented as part of Storefront’s 40th anniversary and will be accompanied by a series of events that examine moments of resistance against the erasure of civic space in New York City.

Public Space in a Private Time: Building Storefront for Art and Architecture is part of an anniversary initiative that studies the organization’s early history to inform future programs. The exhibition is collectively organized by Storefront’s staff with artist and board member Justin Beal. Graphic design by Pentagram.

Storefront’s 40th Anniversary program has been made possible through the support of the Graham Foundation, the Ruth Foundation for the Arts, the National Endowment for the Arts, as well as the New York State Council on the Arts with the support of Governor Kathy Hochul and the New York State Legislature; public funds from the New York City Department of Cultural Affairs in partnership with the City Council; the Storefront Circle and Storefront’s Board of Directors, members, and individual donors.