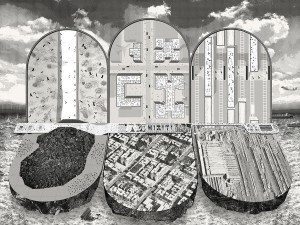 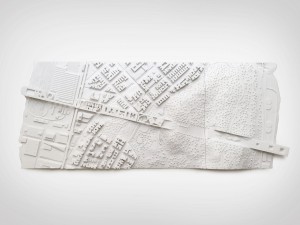 Project Statement
If sharing requires a common collective realm, it also necessitates difference in that each person or constituency offers a unique resource to be shared. At the core of sharing, we find Hannah Arendt’s definition of human plurality as a dialectical condition between our collective and individual desires. Nowhere else is this relationship so clearly depicted as in the grid of Manhattan—which provides a collective armature that enables unique expression. While this difference is typically situated in the interior of the block, the avenue of Broadway inserts difference into the grid itself. By not assimilating into the grid, Broadway instead creates a series of public spaces from the anomalous parcels it forms as it crosses the grid. Similarly, in the far northern reaches of Manhattan, Inwood is one of the few neighborhoods that have not assimilated into the collective grid. With few access points, it sits in isolation. Curiously, its urban grid ascribes to Broadway’s trajectory, eliminating difference, and therefore the production of parcels that resist commodification.

Topography and infrastructure have subdivided Inwood into three islands: Inwood Hill Park; a series of consistent housing blocks; and a parking/maintenance train yard for the New York City Subway. Within this compressed swatch, we see three distinct and critical pieces of Manhattan: its relationship with and romanticisation of nature, its typological development of domestic space, and its lifeblood, the subway.

Our proposal recognizes that sharing is also a dialectic condition, requiring clear delineation between the public and the private as well as the collective and the individual. Furthermore, we contend that sharing emerges at different scales of association — from the territory of the island of Manhattan, the neighborhood, and domestic spaces. Our proposal begins by creating a common neighborhood datum of access, which is aligned with the collective grid of Manhattan. Connecting across the three distinct islands, this swatch provides access to the water, train yard, domestic roofs, and park, gathering the islands into a larger neighborhood. Moreover, this line forms a stage for appearance that still enables each island to remain distinct.

Within Inwood Hill Park, one of the few natural forests in Manhattan, we propose a territorial sharing of nature through rewilding, vis-à-vis the introduction of native fauna and flora. An inverted zoo condition, humans are put on display while animals are able to roam freely. At the scale of the city, we propose that newly programmed subway cars leverage the network of connectivity throughout the boroughs. From shared art galleries, libraries, markets, and gyms, the subway can distribute programs to particularly underserved communities. While the train yard currently separates the neighborhood from the Harlem River as a parking lot for subway cars, it can now provide Inwood with a wide selection of amenities not being used by the larger city. Trapped between the park and train yard is a series of housing blocks that primarily consist of the letter-types “H,” “T,” “C,” and “I.” By addressing these typologies from within the domestic environment, we can alter over sixty percent of the housing on the site. Renegotiating the public/private realm within these types, we have eliminated private restrooms, kitchens, and living rooms, and have consolidated larger communal spaces. At the same time, these typologies retain a clear division of private space for sleeping and working, which becomes even more important when everything is shared.

Participant Bio
The Open Workshop is a multidisciplinary design office focused on critically re-examining the concept of an open work, first posited by Umberto Eco in 1962. The Open Workshop operates as a design-research practice on a variety of scales, from the urban to the domestic. Based in Toronto and San Francisco, the office has garnered recognition through international competitions, exhibitions, and publications that focus on how design-research can renegotiate the relationship between architecture and its environment. The firm’s approach relies on transcalar design techniques that find opportunities to holistically integrate environmental, political, economic, and social factors. The Open Workshop was founded by architect and urban designer Neeraj Bhatia in 2013. In 2016, the office was awarded The Architectural League Prize for Young Architects and Designers.