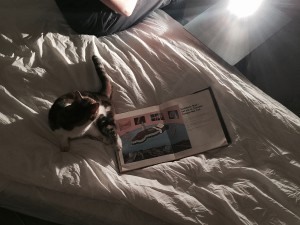 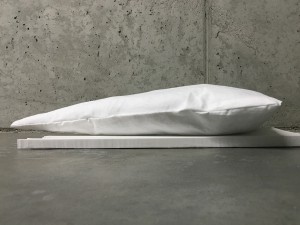 Project Statement
We need chaos in order. We’ve spent millennia creating security, but we now miss the mess that we imagine we once had. On a basic level, the arbitrary fear of modernity has passed because its reality has arrived. The grid is not scary anymore. In fact, it turns out that this reality does not look as different as society once thought it might. In this sense, we are no longer critical of (or whimsical about) an impending technological aesthetic or any real change at all.

Accidentally, nostalgia is the new future in the 21st century.

Now that we’re in this grid, we’re searching for the new angle, perhaps the humanist opposition. But humanism is not random. It is, rather, quite modern; people and the body as parameters.

We propose a pillow for the bodies.

(Madelon Vriesendorp already figured this out in 1975 with Freud Unlimited) And now that we’re content, the question is actually the answer.)

Participant Bio
June-14 Meyer-Grohbrügge & Chermayeff is a collaborative practice; Johanna Meyer-Grohbrügge from Germany and Sam Chermayeff from New York. The two met at SANAA in Tokyo, where they worked together from 2005 to 2010. June-14 is their new venture that  began with a desire to make things, places, and atmospheres for people. Their office and work aims to have people relate to architecture, for architecture to relate to people, and for people to relate to themselves. June-14 searches for an understanding of different ways of living and working in the contemporary world, stemming from a belief that architecture can make things happen and that things can happen to architecture. The office is an exchange with its users, and is open to new ideas.

On a practical level, the principals have experience with a wide range of projects from small gardens and bespoke furniture to office towers. Based in Berlin and New York, the office’s intention is to expand that range while maintaining a dynamic understanding of the human scale.