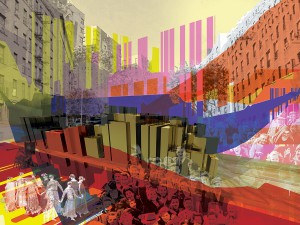 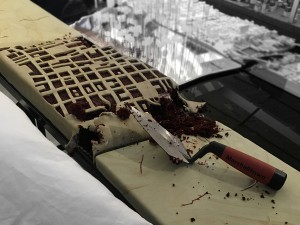 Project Statement
Peer to peer technologies have made sharing available to a community of unrelated individuals. The sharing movement has made you and your belongings available to share for the purpose of experiencing community. Inhabitation has become a trading endeavor, a marketed ideal. To meet someone who has similar dreams and goals, please fill out the form at hand. Data interactions will match correlations of taste and take you right to the action, exactly where you belong, to a community that shares your thoughts and ambitions with their complementary possessions. The city becomes a cluster of groups, a bubble condition of people that are evermore alike.

ShaMBuF [Sharing Marring Bubble Flaring] is a representation, or better yet an abstraction, of an economy; a sharing economy; a manifesto accompanying a sharing economy; an example of the latter. To reveal its mechanisms, the inner workings and the tools inherent to our profession. A form, a diagram, a manifestation! A drawing and a model, a frozen moment of a work in progress. Together, they become a procedure, a dialogue, and ultimately an action that operates upon the spectator. A masquerade, a sham of sorts, an honest truth disguised that mars an object, a form, a city.

Pedro&Juana, founded by Ana Paula Ruiz Galindo and Mecky Reuss, is a studio from Mexico City that works on a variety of projects across creative professions. Dear Randolph, the studio’s project for the 2015 Chicago Architecture Biennial, consisted of a domestic space within a public interior square composed of moving lamps, rockers, and tables of different heights along with a wallpaper, presenting objects in a continuous relationship with the public. Other projects include Sesiones Puerquito (Little Pig Sessions) in 2012, which used the process of cooking a suckling as a pretext for better conversation; Archivo Pavilion (2012), an intervention in the gardens of Archivo Diseño y Arquitectura DF/Mexico; Hellmut (2013), a table turned bench turned table for Gallery 1 of Museo Jumex DF/Mexico; Casa Reyes (2011-2012), an annex in an ex-colonial house in Merida/Yucatan; and Cocina DS (2013), a kitchenette entrance for Dorothea Schlueter Galerie in Hamburg/Germany.