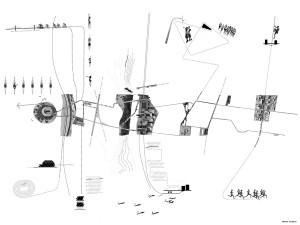 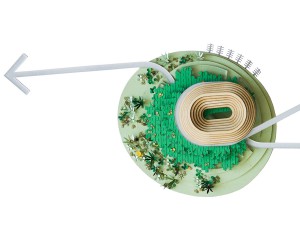 Project Statement
GAME ON! is a recreation focused infrastructure that encourages Healthy Living and fosters interaction and sharing between adjacent communities. GAME ON! cuts across culture, race, and class in its provision of space and opportunities for athletics and outdoor fun in the city.

GAME ON! is comprised of several key elements that formulate a healthy urban infrastructure: a connective tissue of small and big green sites that recast the infrastructure of city streets through a series of large hybrid programmed parks. GAME ON! brings a much needed dose of Healthy Living and fun to this east-west slice of Manhattan and the Bronx.

Located in Washington Heights, the most narrow and one of  the highest parts of Manhattan, GAME ON! extends beyond the island of Manhattan, bundling together the Bronx to the east as well as the Hudson and the Harlem Rivers. GAME ON!’s infrastructure of Healthy Living in Washington Heights and the Highbridge neighborhood of the Bronx merges with a series of existing north-south parks as it cuts across the Bronx, the Harlem River and Manhattan, and then into the Hudson River toward New Jersey and the Palisades. The hospital district in Washington Heights is the institutional paradigm of health care, but the real public infrastructure of health and healthy living resides in the parks and recreational activities. GAME ON! threads together Riverside Park, the banks of the Harlem River, the housing towers in the park at Highbridge Gardens, a series of smaller parks within the grids of Manhattan and the Bronx, and the NYCHA Claremont Village housing in the Bronx (creating a new Bronx Highline over the Amtrak railroad line that currently divides it). Recreation is central to GAME ON! and is not only located in the parks but also in sites such as the existing Armory Track Field House and in the bicycling culture that courses through Washington Heights on Riverside Drive. The park of NYCHA’s Highbridge Gardens’ “towers in the park” is also an untapped site for recreation and for reconsideration of the often marginalized ground of the New York City Housing Authority’s communities.

LEVENBETTS is an award-winning New York City based architecture practice. The office was founded by David Leven and Stella Betts in 1997, and it focuses on design at all scales, including urban design, public architecture, houses and housing, commercial workspaces, exhibitions, and furniture. Central to the firm’s work is an architecture that engages its urban and/or natural environment.

LEVENBETTS’ work has been recognized nationally and internationally through awards, exhibitions, and publications. The office has won seven New York City AIA awards, most notably for its urban design and housing proposal entitled “PhX caseXcase: Cactus Flower Housing,” and for a parking garage project called Chicago Filter Parking, which is part of a larger ongoing study that applies new sustainable transportation solutions and green planting systems to aging infrastructures. Currently, the office is working on three libraries, a renovation for Cornell University Rhodes Hall, three houses in upstate New York, and a 300,000 square foot commercial building in Harlem through the New York City Economic Development Corporation.

The work of LEVENBETTS has been published in various design magazines and books. In 2009, Princeton Architectural Press published a monograph on the firm’s work.  LEVENBETTS is currently working on its second monograph.