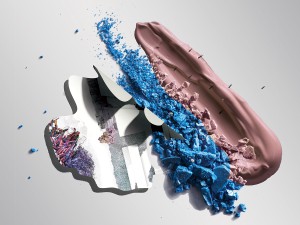 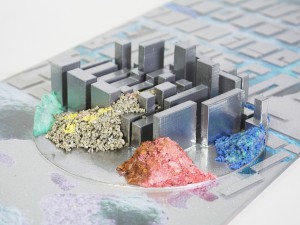 Project Statement
The day all of our unwanted things relocated to the city’s open spaces was the day the new commons appeared. All of our idle possessions, discarded objects, various rubbles and clutter—the stuff you can always find on the curb, on Craigslist, or heaped up in an empty lot—was now the material of a new urban space.

What had been distributed across closets, garages, attics, and basements was now gathered into long piles that formed large open rooms. What had been a homely mishmash of stuff was now sorted, redistributed, and piled up according to principles that were not readily apparent. However, it has been noted that some areas of the piles are softer to climb on, some have shaded interiors, and some continue to grow into tall chalky cliffs.

To everyone’s surprise, no one balked at the appearance of junk in the streets and open spaces. Maybe this was due to the sheer scale of the piles and the spaces they made. Or it was the addition of multi-story scrims, which provided visual backdrops for the piles. These suggested landscapes other than those which the city could offer on its own…in any case, the immediate reaction to the commons was more of curiosity and exploration.

People in one neighborhood began to boast that the quality of light in their apartments had dramatically improved with the mountain of CDs shimmering in the morning light. In another neighborhood, kids redrew the boundaries of their territorial war games according to what was piled where. In the park, a heap of LACK tables peeked above the tree-line. And, it was said, its nest-like quality also made it a home to all manner of wildlife.

A few intersections became destinations for tourists who wanted to experience the rainbow canyon view up Fifth Avenue. It requires a long meander or cross-town bus to follow the shifting purple hue of a long ridgeline that originates on the East Side and dies into the Hudson.

Some say the commons are an ecological gesture, a last ditch effort to instill a shared environmental consciousness in people. Some say the idea of the commons has no function or message, but it simply brings together the physical stuff that is overlooked in our preoccupation with immaterial transactions and communications. No one really knows. But most agree that there are ways to experience the city, in both its material and imaginary dimensions, that were not there before. With the commons, the age of rummage urbanism began.

Participant Bio
T+E+A+M is a collaboration between Thom Moran + Ellie Abrons + Adam Fure + Meredith Miller. Collectively, our work centers on architecture’s physicality as an agent of cultural, environmental, and urban production. Most recently, T+E+A+M exhibited The Detroit Reassembly Plant in “The Architectural Imagination,” the U.S. Pavilion at the 2016 Venice Biennale.