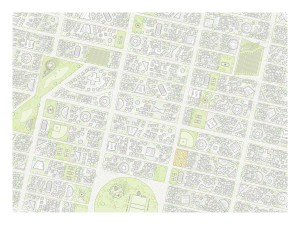 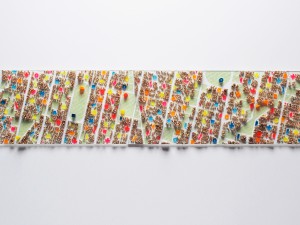 Key Party: City as Home represents an alternate, hypothetical Manhattan that extrapolates on a universal culture of sharing and its corollary – a retreat to small spaces affording privacy and escape from pervasive civic life. Acknowledging the potential for both utopian and dystopian consequences for a society based on sharing, the title of the project, Key Party, refers to extended (and inherently limited) access to shared services and amenities in a society with both increased opportunities and rising inequality.

City blocks are reimagined as overlapping, dispersed homes, comprised of larger shared buildings and slender mini-towers that allow for solitude within the crowd. A lower density, afforded by the efficiencies of sharing, results in additional networks of public space and greenery at the scales of block and city. Rather than a manifesto or proposal for urban renewal, Key Party: City as Home functions as an extrapolation, exposing both the excitement and peril of the sharing model of society.

nARCHITECTS was founded by Principals Eric Bunge and Mimi Hoang with a goal of addressing  contemporary issues through innovative concepts, social engagement, and technical experimentation. The letter “n” represents a variable, indicating the firm’s interest in designing for a dynamic variety of experiences within a systemic approach. The firm’s work instigates relationships between architecture and public space, and their dynamically changing contexts.