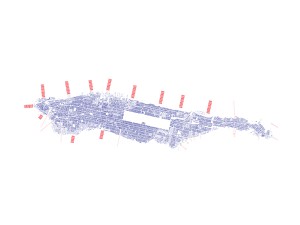 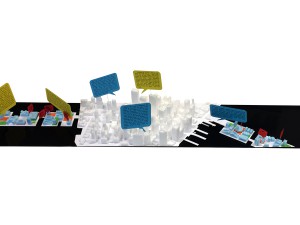 A recent study showed that New York’s population spends up to 65% of gross salary on housing. A city which once had reasonable land values has become a center for global investment, where the average individual is priced out by an institutional investor looking for capital protection. Manhattan has one of the highest land values in the world, which drives up rental and property price levels to unsustainable levels. This increase has led to native Manhattanites fleeing to the boroughs. What is interesting to us is the evolution of Manhattan as a series of concentric rings growing into the bay.  This will continue with the Big U expansion and resilience plan, which will create a much needed social and green edge to Manhattan.

We propose a project that links Manhattan to the boroughs more effectively, through a series of habitable bridges. The water, owned by the City of New York, could be considered a land value of 0, a gift from the City to its people. The resultant built housing could have much lower rent, and would only be accessible to those who need it most. Our project site, in Manhattan’s financial center, has some of the highest land values and costs in the world. Our proposal allows average workers on normal salaries, from young interns to a hotdog vendor, to live near their places of work; a benefit available in most cities that has become lost in New York. Rather than long commutes, we propose an affordable belt of bridges that would bring people closer to what was traditionally the New York living experience: the ability to live within walking or cycling distance from one’s office. The bridges would then become collective centers for recreation, play, residence, and work, depending on the tangential need in Manhattan. The rent in such buildings (including profit for developers, calculated with an assumed payback of 20 years and rate of 15%) would mean a rent of $1,550 dollars for an 85 square meter apartment.

This is a real possibility. Other cities (for example, Copenhagen) have stepped in to rethink how they can make housing more affordable for the average citizen. What looks like a Metabolist vision plan could turn into a reality. The question is this: is New York brave enough to do it?

URBAN AGENCY is an award-winning architecture firm with a broad international profile. The office is based in Copenhagen, Dublin, and Lyon, with projects ongoing throughout Europe, Asia, and North Africa. It is led by four partners: Maxime Laroussi, Andrew Griffin, Henning Stüben, and Heechan Park.

URBAN AGENCY takes pride in devising innovative solutions that address contemporary challenges in cities and the built environment. In designing pragmatic, sensitive, and innovative solutions, we create new possibilities for a better everyday life. We design flexible, dynamic, and powerful projects that can absorb complexity and change while simultaneously maintaining and building upon existing qualities.

URBAN AGENCY’s value add is through design for the betterment of society, as well as for the individual client. We have a proven track record of adding monetary value to new and existing buildings. Through careful analysis, programming, and massing, we design innovative mixed-uses, providing additional square meters for end users and stakeholders. URBAN AGENCY believes in creating spaces where individuals can interact; aesthetically inviting spaces of social encounter. We develop comfortable and ecologically responsible solutions that create new value and identity, and that are economically profitable.