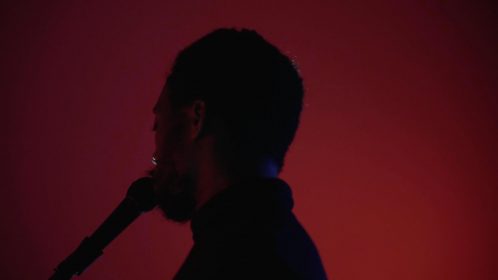 Learn more about the project and see photos here and below.

A year of social distancing has made time, touch, and gesture elusive. The spaces people inhabit together are increasingly temporal and psychological, rather than physical.

This extended meta-concert at Storefront for Art and Architecture spatializes artist Christian Nyampeta’s recent album, An Evening with Christian Nyampeta. Over the course of the last decade, Nyampeta has been making musical experiments as a way to commemorate the shifts caused by major events: the Fukushima nuclear disaster, police shootings, the intensification of tyrannical regimes, and the current pandemic, to name a few. Each track emerges from Nyampeta’s intimate act of seeking the company of artists, musicians, theorists, and other figures. He mixes their ideas with his own and translates these allusive collaborations into sonic compositions. In doing so, he imbues them with what he calls a sociography of emotions, collectivizing personal experiences into structures of feelings.

A Long Evening with Christian Nyampeta, like its namesake album, is presented during a brief hiatus in the regular course of operating, born as an impromptu act of solidarity. It stretches that brief period of time that sits between day and night, between public and private, between outside and inside, between what the world is and what it could be. Offering a time zone of respite from the exhaustion, loss, grief, and conflict of our current era, it instead imagines a moment of belonging, joy, generosity, and creation in the face of an ever challenging world. In the process, Nyampeta asks a crucial question that provokes a more hopeful future: how do we rest together?

This event is open to all who would like to attend. Please RSVP here.