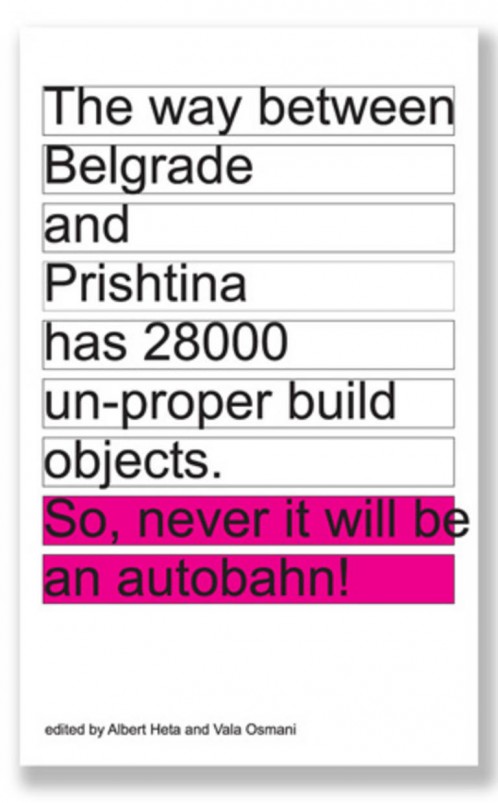 7 pm
Presentation of the publication “The way between Prishtina and Belgrade has 28000 un-proper build objects. So, never it will be an autobahn!”, edited by Albert Heta and Vala Osmani.

Public reading of texts:
‘The State and Contemporary Art?’ by Branimir Stojanovic,
‘Society of civil opportunism’ by Besnik Pula and
‘Speculative Provisionality’ by Albert Heta.

“The way between Prishtina and Belgrade has 28000 un-proper build objects. So, never it will be an autobahn!” includes: transcripts from the seminar “Cultural Policies as Crises Management?” designed as a challenge not only to the Kosovar cultural and political scene but also to the European intellectuals to help them see the political process in Kosova as a European process that concerns not only politics and politicians but also thinkers and culture workers in Europe; and texts.

Future Europe is being designed in Kosova.

This event was designed to push the art scene away for the non-articulative mode of functioning and away from a mode that prefers and promotes artist without any position even when working in the extremely politically charged context.
In the wider context this event and this publication include geographies and cities in Europe with contributions by selected individual with potential to reshape the contemporary thought.

These are individual perspective on Europe and Kosova, on countries, issues, cultural policies and challenges encountered, And Serbia.

The publication “The way between Prishtina and Belgrade has 28000 un-proper build objects. So, never it will be an autobahn!” is the product of the seminar “Cultural Policies as Crisis Management?, project by Stacion Center for Contemporary Art, Prishtina in collaboration with eipcp, Vienna in the framework of the project Translate Beyond Culture: The Politics of Translation.

“The way between Prishtina and Belgrade has 28000 un-proper build objects. So, never it will be an autobahn!”, edited by Albert Heta and Vala Osmani. Publisher: Stacion Center for Contemporary Art, Prishtina. Size: 110×178 mm Pages: 272 Designed in Kosova by DZG Printed in Kosova by Raster

Albert Heta born in Prishtina, works as an artist, designer and an art manager. His notable works include “It’s time to go visiting: No visa required”, a public intervention on British Airways billboards in Prishtina (2003), ‘Embassy of the Republic of Kosova in Cetinje’ (2004) for Cetinje Biennale or his ‘Kosovar Pavilion Venice Biennial 2005’ distributed in collaboration with e-flux (2005). His works never fail to provoke debate in relation to the social, cultural and political mechanisms of power, and evoking sentiments and discussions rekindled as the result of the “disseminating” of these works in public context or censored and vandalized when touching issues related to colonial politics of the contemporary time, state, identity and international/ national politics, Heta’s work has been exhibited in a wide international context including: Apexart, New York, MARCO, Vigo, Kunsthalle Fridericianum, Kassel, Galeria Nova, Zagreb, etc. He is co-founder of a project institution Stacion – Center for Contemporary Art Prishtina.

Besnik Pula Born in Prishtina, is a Ph.D. candidate in the Department of Sociology of the University of Michigan and an adjunct instructor in the Department of Politics at New York University. His research includes questions of state building, intellectual discourse, civil society, and international intervention and administration in the Balkans. He has published a number of scholarly articles and contributes frequently to the Kosovo press. His activities in Kosovo are aimed at the regeneration of theoretical reflection and critical analysis of contemporary and historical social and political processes in Kosovo and the Balkans as seen in a broader comparative and global framework. These activities are mainly carried out through groups such as the former Department for Social Critique and the recently founded Research Group in Sociology in Philosophy based in Prishtina.

Branimir Stojanovic, philosopher and theoretician of psychoanalysis, founder of the Shool for History and Theory of Images where he lectured on the subject of Art and Psychoanalysis. Member of the Centre for Contemporary Art – Belgrade editorial board, editor of the Gay Science book edition and member of the Break (Prelom) magazine Advisory Board. Published numerous articles, essays and studies in periodicals and collections of essays.

Vala Osmani born in Prishtina, is architect, co-founder and director of the architecture department of a project institution Stacion – Center for Contemporary Art Prishtina. She has co-designed and co-curated the program of Stacion since 2006. She was co-curator of Stacon’s program for the collaboration project LE MONDE AUTOUR DE VOUS initiated by Abdellah Karroum at the Brussels Biennale 1 and is co-editor of the publication “The way between Prishtina and Belgrade has 28000 un-proper build objects. So, never it will be an autobahn!”.