home • archive • Between War and Peace

Between War and Peace 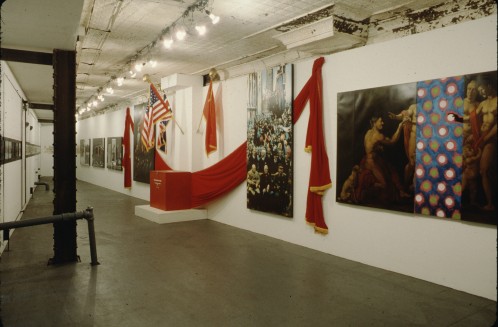 Between War and Peace was an exhibition dedicated to the 50th anniversary of the end of World War II. In 1945, at the end of the war, and at the beginning of the U.N. era, a final meeting between Winston Churchill, Franklin Delano Roosevelt and Josef Stalin convened. The exhibition was inspired by an old photograph, taken on this occasion, of the world’s leaders posing for history’s camera. Fifty years later, Komar and Melamid returned to the image and incorporated it in their plans for a mural entitled “Allies,” which was to be painted near the United Nations Building. Their proposals were rejected by city officials, but plans for several versions of the public artwork, created over the years, were displayed in this exhibition at Storefront. A ballot box which allowed the viewer to vote for his or her favorite version was an integral part of the installation.