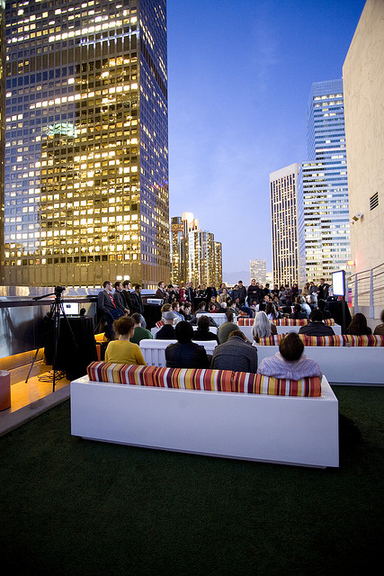 Courtesy of Storefront for Art and Architecture, 2009.

A live 5-day blogathon of back-to-back discussions, interviews, panel talks, slideshows, films and parties with scheduled and unscheduled guests, themed around landscape and the built environment.

mudd up!,  We Make Money Not Art

On the occasion of Los Angeles Art Weekend, Storefront for Art and Architecture and ForYourArt presented Postopolis! LA, a live five-day event of near-continuous conversation about architecture, art, urbanism, landscape, and design held in Los Angeles from 31 March to 4 April 2009. Six bloggers, from five different cities around the world, hosted a series of discussions, interviews, slideshows, panels, talks, and presentations, fusing the informal energy and interdisciplinary approach of the architectural blogosphere with the immediacy of face-to-face interaction.

Over the course of five days, the six host bloggers invited 40+ participants from a range of fields including architecture, urban planning, geology, defense, publishing, game design, artistic practice, oceanography, music, politics and many others to give brief presentations, each followed by a public discussion.

Postopolis! LA followed in the footsteps of the first groundbreaking edition of Postopolis! held in New York in May 2007, hosted by BLDGBLOG, City of Sound, Inhabitat and Subtopia and attended by several thousand people over a period of five days. Postopolis! LA took place during the 2nd annual Los Angeles Art Weekend, highlighting the city’s vast array of creative talent.

SCHEDULE
The following lineup of speakers for Postopolis! LA was curated by the authors of the six host blogs.

BLDGBLOG
Author: Geoff Manaugh (San Francisco)
Geoff Manaugh is senior editor of Dwell magazine and the author of BLDGBLOG, a 2006 Yahoo! Top 25 Pick of the Year and a Time Magazine Style & Design 100 blog for 2007. Since its launch in 2004, BLDGBLOG has been read by more than 5 million people. Manaugh has been called “the world’s greatest living practitioner of ‘architecture fiction’” by Bruce Sterling, and one of the 50 “most influential architects, designers, and thinkers” in the field today by Icon magazine. Geoff Manaugh was a participant in the first edition of Postopolis! in NYC, 2007.

City of Sound
Author: Dan Hill (Sydney, Australia)
City of Sound is a blog about cities, architecture, design, media, and culture—often colliding in the same post on the imagined connections between travel writing and design, or football and architecture. Dan Hill was a participant in the first edition of Postopolis! in New York City, 2007.

Subtopia
Author: Bryan Finoki (San Francisco)
Subtopia (http://subtopia.blogspot.com) began as a site where research on the broad topic of “military urbanism” could be gathered. As time went on, Subtopia evolved into a larger, ongoing chronicle of how different Orwellian trends in urbanism engage the geopolitical process of constructing and living in cities all over the world today. In the world of architecture blogging, Subtopia is one of the most fascinating and unique destinations. Bryan Finoki was a participant in the first edition of Postopolis! in New York City, 2007.

Mudd Up!
Author: Jace Clayton (New York)
Jace Clayton is a writer & musician based in Brooklyn. His essays have appeared in such places as The Washington Post, Frieze, The Fader, Wire, Bidoun, The National, n+1, Abitare, and on his blog, Mudd Up! As a musician, he’s performed in over 25 countries, released records on Soul Jazz & Tigerbeat6, DJ’ed in a band with Norah Jones, done two John Peel Sessions, and was turntable soloist with the 80-member Barcelona Symphony Orchestra. Jace Clayton hosts a weekly radio show on NYC-area FM station WFMU, 91.1 fm, featuring lots of international exclusives and live guests.

We Make Money Not Art
Author: Regine Debatty (Paris, France)
The blog we-make-money-not-art.com (WMMNA) is a series of reports on art exhibitions, architecture events, conferences on digital culture, and design festivals taking place all over the world. The blog also features interviews with creative people, book reviews and visits to art and design schools. WMMNA won a Webby Award in both 2006 and 2007 for best personal/cultural blog and a Media Guardian Innovation Award in 2008 as Best Independent Blog. In addition to writing about the intersection between art, design, and technology, Régine Debatty also curates art shows, organizes discussion panels, and lectures internationally about the ways that artists, hackers, and interaction designers continue to(mis)use technology.