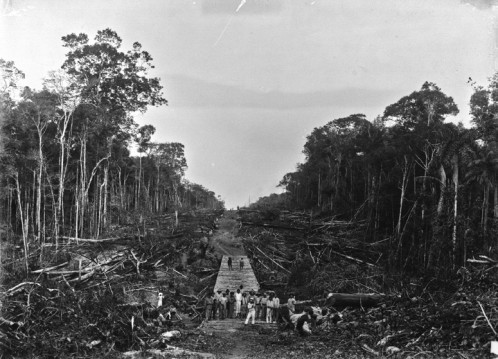 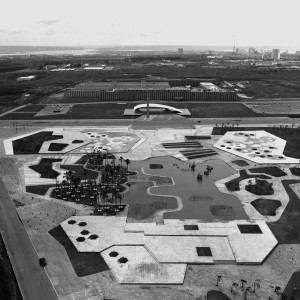 Reading Images Series: Depositions looks into Brazilian architect Roberto Burle Marx’s eighteen environmental depositions, a series of position pieces written and delivered to the Federal Council of Culture, a plenary convened by the Brazilian military dictatorship in 1967. Burle Marx’s seven-year tenure on the council, from 1967 through 1974, was a period that included the regime’s most oppressive years.

Catherine Seavitt’s recently released book, Depositions: Roberto Burle Marx and Public Landscapes Under Dictatorship, includes the first English translations of these depositions, addressing such issues as deforestation, national parks and land conservation, urban disfiguration, botanical gardens, ecological devastation, and the unique qualities of the Brazilian landscape. The speeches articulate an opposition to the regime’s strategy of national economic development. Yet the complexity of the historical and political context cannot be overlooked – Burle Marx was a voluntary cultural advisor to a regime that would execute a series of brutal human rights violations as well as devastating environmental abuses in the interest of national economic development.

Reading Images Series: Depositions invites experts in fields that touch upon environmental issues, from landscape architecture to preservation and policy, to examine the conflicting agency of undertaking environmental advocacy work while operating under restrictive, and often oppressive, regimes.

Copies of Depositions: Roberto Burle Marx and Public Landscapes Under Dictatorship will be for sale during the event.

Catherine Seavitt Nordenson, ASLA, AIA, is an associate professor of landscape architecture at City College of New York and principal of Catherine Seavitt Studio. Her research explores adaptation to climate change in urban environments and the novel transformation of landscape restoration practices. She is also interested in the intersection of political power, environmental activism, and public health, particularly as seen through the design of public space and policy. Her work has been published in Artforum, Avery Review, Harvard Design Magazine, JoLA, LA+, Landscape Architecture Magazine, Praxis, and Topos. Recent books include Structures of Coastal Resilience (Island Press, 2018) and Depositions: Roberto Burle Marx and Public Landscapes under Dictatorship (University of Texas Press, 2018).

Laura Belik is a PhD Student in Architecture- History, Theory and Society at UC Berkeley. Laura holds an MA in Design Studies from Parsons- The New School (New York) and a BA in Architecture and Urban Planning from Escola da Cidade (São Paulo- Brazil). Her main research interests are urbanism, politics of space, urban democracy and Latin America. Laura’s current work is related to the urban and constructed environment and its influence in social and political life, dealing with issues of land distribution, migration, isolation and spatial inequality.

Caitlin Blanchfield is a PhD candidate in architectural history and comparative literature and society at Columbia University and a contributing editor to the Avery Review. Her work investigates issues of territoriality, infrastructure, and sovereignty.

Jaffer Kolb is a designer based in New York and co-founder of the award-winning architectural practice New Affiliates. He oftentimes writes–about ideologies of form, queer landscapes and alternative economies–and sometimes curates–currently as a co-director of the Brooklyn-based gallery 1.5 Rooms. He was the 2015 Muschenheim Fellow at the University of Michigan, and before that worked as a designer in New York, Chicago, and Los Angeles. His work has appeared in numerous exhibitions and has been published internationally.

Annie Phaosawasdi joined Hargreaves Associates in 2011. Prior to Hargreaves Associates she was a landscape architect at Balmori Associates in New York City. She is a registered landscape architect with a wide range of project experience, from master plans to construction documentation. She was the project landscape architect for Zaryadye Park, a 32- acre park in Moscow, Russia and University of California Berkeley Art Museum & Pacific Film Archive with Diller Scofidio + Renfro; Penn’s Landing Redevelopment for the Delaware River Waterfront Corporation in Philadelphia; and Jamaica Bay Parkland Visions Plan, an Ecological Visions Plan for the 10,000 acres parkland on New York harbor jointly owned by National Parks Service and the NYC Department of Parks and Recreation. She is currently the project landscape architect for the Central Access Philadelphia Project, an 12-acre park that will cross the I-95 and Columbus Boulevard to connect with the banks of the Delaware River, with Pennsylvania Department of Transportation; Carpenter Park, a 9-acre park in Dallas, Texas; and multiple projects with NYC Department of Parks and Recreation.

Frank Ruchala Jr. is the Deputy Director for Zoning at the NYC Department of City Planning. He has been overseeing the implementation of zoning changes identified in the Housing New York plan for affordable housing, as well as other administration priorities. He previously worked in the agency’s Manhattan Office where he was responsible for projects in Midtown Manhattan and Hudson Yards. He has taught in urban design studios at Columbia University and his independent research on oil and suburban development have been exhibited and published internationally. Frank holds masters degrees in urban planning and architecture from Harvard University’s Graduate School of Design and a bachelor in urban studies from Rutgers University.

Catherine Seavitt Nordenson’s new book Depositions: Roberto Burle Marx and Public Landscapes under Dictatorship (University of Texas Press, 2018) explores a pivotal moment in the preeminent modernist landscape architect’s career—the years in which he served as an appointed member of the Federal Cultural Council in Brazil, an advisory panel created by the military dictatorship in the mid-1960s. Burle Marx’s consular speeches notably critique the nationalist developmental policies of the military regime and advance his position as an ecological activist. The first English translation of Burle Marx’s eighteen environmental position pieces, Seavitt Nordenson contextualizes the depositions by analyzing their political and cultural contexts, as well as by presenting pertinent examples of Burle Marx’s public projects in Brazil—several commissioned by the military regime itself. Despite the inherent conflict and risk in working with the military regime, Bure Marx boldly used his position to advocate for the protection of the unique Brazilian landscape, becoming a prophetic voice of caution against the regime’s policies of desenvolvimento and resource exploitation. These eighteen engaging position pieces address deforestation, the establishment of national parks, the place of commemorative sculpture and monuments, and the unique history of the Brazilian cultural landscape—a timely set of documents given the current political milieu.

Richly illustrated, the book includes over 180 images drawn from dozens of archives in Brazil, Venezuela, New York, Berlin, and Paris. The book establishes the lineage of the construction of culture by the state in Brazil from the arrival of the Portuguese king João VI to Rio de Janeiro in 1808 through the coup that established the military dictatorship in 1964. João VI’s son Pedro I claimed Brazilian independence from Portugal in 1822, declaring himself Emperor. He abdicated in 1831, returning to Portugal and leaving his young son Pedro II as the last Emperor—he would rule until 1889, devoting himself to the support of culture, education, science, and the natural world, building the values and institutions of the future nation-state. Pedro II’s patronage of the French hydraulic engineer and botanist August Glaziou, the designer of significant imperial and public parks, plazas, and streetscapes in the picturesque style from the 1860s through the 1880s, was a significant influence on Burle Marx’s work in the twentieth-century.  Burle Marx explored the themes of ecology and biodiversity throughout his professional life. He would also remain close to those in political power, collaborating with an impressive roster of modern architects and accepting commissions from powerful members of the Brazilian political elite—including those connected to the Getúlio Vargas Estado Novo dictatorship from 1937-1945 and the military regime of 1964-1989. Throughout the book, the images support Burle Marx’s positioning of nature, environmental conservation, and ecology as part of the cultural expression of a modern Brazil—while addressing the ethical questions and political motivations of his role as advisor to the military regime.