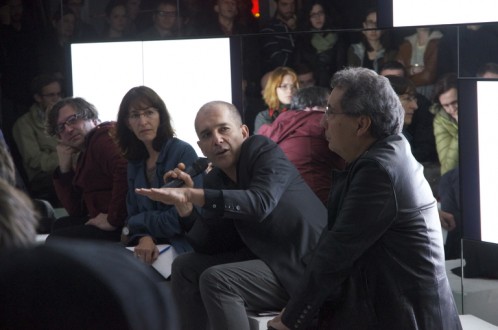 Socialist Architecture: The Vanishing Act is a collaborative project between photographer Armin Linke and architect Srdjan Jovanovic Weiss. Weiss and Linke have worked together since 2009 to visit and document selected examples of ex-Yugoslav Socialist architecture in order to document the state that they are in today. The Socialist Federation of Yugoslavia
vanished during the early 1990s and the former Socialist states were Balkanized into a number of emerging democracies. Each of these new states inherited monuments, buildings, landscapes, and infrastructure, which were constructed specifically for the former Socialist context and needs. After Yugoslavia vanished, most of the inherited architecture was left vacant and in a state of limbo between being repurposed and reused for new content, or simply being declared Socialist archeology, and continuing its life as ruins. By creating documentation, Socialist Architecture: The Vanishing Act captures the indecision of five particular emerging democracies today: Croatia, Bosnia-Herzegovina, Montenegro, Macedonia, and Serbia, and the distinct effects their irresolution creates spatially and visually on former Yugoslav architecture.

Armin Linke (born 1966, lives and works in Berlin) is an artist working with photography, combining different mediums to blur the border between fiction and reality. He builds up an ongoing archive on human activity and the most varied natural and man-made landscapes.

Srdjan Jovanovic Weiss (born 1967 in Subotica, Serbia) is an architect educated at Harvard University and Belgrade University. He recently collaborated with Herzog & de Meuron architects and is the founder of Normal Architecture Office (NAO) as well as co-founder of School of Missing Studies, network for cultural and urban research.

Eduardo Cadava teaches in the Department of English at Princeton University, where he is also an Associate Member of the Department of Comparative Literature, the School of Architecture, the Program in Latin American Studies, and the Center for African American Studies. He is the author of Words of Light: Theses on the Photography of History and Emerson and the Climates of History, and co-editor of Who Comes After the Subject?, Cities Without Citizens, and a special issue of the South Atlantic Quarterly entitled And Justice for All?: The Claims of Human Rights. He has published articles on, among others, Emerson, Benjamin, Kafka, and Celan, and on topics ranging from photography, architecture, democracy, and war, to memory, slavery, and the ethics of decision. He also has translated several essays by Derrida, Lacoue-Labarthe, Blanchot, and others. He currently is finishing a collection of essays on the ethics and politics of mourning entitled Of Mourning and Politics, a collection of essays entitled Paper Graveyards: Essays on Art and Photography, and a small book on the relation between music and techniques of reproduction, memorization, and writing entitled Music on Bones. He also is co-directing a three-year collaborative project entitled The Itinerant Languages of Photography that includes photographers, artists, and scholars from the United States, Latin America, and Spain, and completing a translation of Nadar’s memoirs, Quand je etais photographe, for MIT Press.

Nina Rappaport is an architectural critic, curator, and educator. She is publications editor at Yale School of Architecture and the editor of the school’s book series, the biannual publication Constructs, and the school’s exhibition catalogs. Her current research and projects focus on the intersection of urban design and infrastructure, innovative engineering, and factory spaces.

The Reading Images Series is a new event series that brings groups of scholars, architects, artists and critics together to closely look into images and construct arguments, narratives and observations that produce incisive readings of form, politics, gaze and representation.