home • archive • Reading Images Series: After Belonging and the Spaces of a Life in Transit

Reading Images Series: After Belonging and the Spaces of a Life in Transit 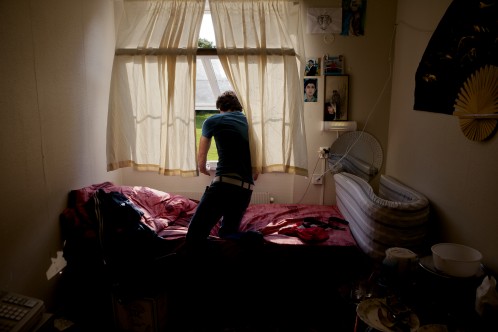 Along with the curators of the Oslo Architecture Triennale 2016:

The increasing global movement of people, information, and goods has destabilized what we understand as “residence,” undermining spatial permanence, property, and identity. This process of circulation brings greater accessibility and more diversity to remote territories, transforming the way we own, exchange, and share goods and resources. It simultaneously increases inequalities for large groups, who are kept in precarious transit.
These transformations concern both our attachment to places—where do we belong?—, as well as our relation to the objects we own, share, and exchange—how do we manage our belongings? Being at home has a different definition nowadays, both within domestic settings and in the spaces defined by national boundaries.
“Reading Images: After Belonging” reflects on a group of images that frame new objects, spaces, and territories which define our transformed condition of belonging under global regimes of circulation.
We invite the participants to critically consider the different scales involved in these transformations (from the drawers in which we keep our belongings to the territories in which we exchange them) and their different media (from the materiality of legal borders to the media spaces constructed by new home-sharing platforms and applications).
The event is presented in conjunction with the launch of the competition “After Belonging: Intervention Strategies,” a part of the program of the 2016 Oslo Architecture Triennial.

“Reading Images: After Belonging” is organized on the occasion of the launch of After Belonging: Intervention Strategies competition, which will be launched in September 2015 and is part of the program of the 2016 Oslo Architecture Triennale.

About the 2016 Oslo Architecture Triennale Curators:

Lluís Alexandre Casanovas Blanco is a New York based architect and scholar. He is currently a PhD Candidate at Princeton University. Casanovas was trained as an architect at ETSABarcelona and the Edinburgh College of Art, and graduated from the MSc in Advanced Architectural Design at Columbia GSAPP. Casanovas has co-curated the lecture series “Margins and Hyphens” at Princeton SOA, and the symposium “Conflict of Interests” on architectural research at Columbia GSAPP. He has collaborated with different design offices and research institutions as the Buell Center for the Study of American Architecture or the GSAPP Global Africa Lab. Casanovas has taught studios at Barnard College, Princeton University, and ETSA Barcelona. His current interests include the aesthetic agendas of the architectures resulting from institutional practices or the relationship between the history of the senses and architecture.

Ignacio G. Galán is a New York based architect and scholar. He was trained at TU Delft and ETSAMadrid, and graduated as a Fulbright Scholar from the MArchII at Harvard GSD. He has been a Fellow at the Spanish Academy in Rome, and is a PhD Candidate at Princeton University. As the Principal of [igg—office for architecture], his designs have been awarded in different competitions including the First Prize for the New Velodrome in Medellín, and he has been nominated to the 2014 Iakov Chernikhov Prize. His work has resulted in different publications and exhibitions including the installation “Cinecittà Occupata” for the 2014 Venice Biennale by invitation of the general curator Rem Koolhaas. Galán teaches studios and seminars in different institutions including Columbia GSAPP and PennDesign. His work concentrates on the architectures articulating modern and contemporary societies, particularly addressing their relation to process of material and cultural circulation, and the mediations transforming their occupations.

Carlos Mínguez Carrasco is a New York based architect and curator. He is Associate Curator at Storefront for Art and Architecture. In 2014 he was Assistant Curator of OfficeUS, the U.S. Pavilion at the 2014 Venice Biennale. Previously, he co-founded PKMN, an internationally renowned collective based in Madrid. Trained as an architect at ETSABarcelona and TU Delft, he graduated from the MSc in Critical, Curatorial and Conceptual Practices in Architecture at Columbia GSAPP. Mínguez has organized a wide range of exhibitions, events and competitions including BEING, Storefront’s 30th Anniversary exhibition, Letters to the Mayor, and the platform World Wide Storefront. His work has been exhibited and published in different journals asDomus and Código and he is editor of two forthcoming publications OfficeUS Manual and Sf30 (Lars Muller Publishers). Mínguez has lectured in different universities including Columbia GSAPP, Harvard GSD, Princeton University SoA, and RISD.

Alejandra Navarrete Llopis is a New York based architect. Navarrete was trained at ETSAMadrid and IUAVenezia, and graduated from the Master of Science in Advanced Architectural Design at Columbia GSAPP where she is currently Adjunct Assistant Professor. She is the principal of NaMi, an architecture design and curatorial office where she is currently involved in projects as the exhibition design for the Iberoamerican Art Museum of Alcala de Henares University. In 2006 she co-founded PKMN, an architect’s collective based on the research of art, architecture, city and the citizen through the use of actions and exhibitions. PKMN has been widely awarded, published and exhibited as in Fresh Latino and Storefront for Art and Architecture, New York. She collaborated with Solid Arquitectura, receiving the first prize for the Performing Arts Center International Competition in Seoul and the “Aguila-Alcatel” Apartment Building in Madrid that was exhibited in the Spanish Pavilion at the 2014 Venice Architecture Biennale.

Marina Otero Verzier is an architect based in Rotterdam. She is Head of Research at Het Nieuwe Instituut. Previously, she was Director of Global Network Programming at Studio-X, and Adjunct Assistant Professor at Columbia University GSAPP. Otero studied architecture at TU Delft and ETSAMadrid, where is a PhD candidate. In 2013, as a Fulbright Scholar, she graduated from the M.S. in Critical, Curatorial and Conceptual Practices in Architecture at Columbia University GSAPP. Her work, recently awarded by The Graham Foundation and Fundación Arquia, has been published in different publications including sqm: The quantified Home, Arquitectura Viva, andDomus. Otero is co-editor of Promiscuous Encounters andUnmanned Architecture and Security Series, and has curated exhibitions at The 2013 Shenzhen Bi-city Biennale and the 2014 Istanbul Design Biennial. Her current research is concerned with how changing notions of privacy and safety, and their articulation with global circulatory regimes, have an effect on the spaces of residence.

Eva Franch i Gilabert is a New York based architect, curator, educator and lecturer of experimental forms of art and architectural practice. In 2004, she founded her solo practice OOAA (Office of Architectural Affairs) and since 2010 is the Chief Curator and Executive Director of Storefront for Art and Architecture in New York. In 2014 Franch, with the project OfficeUS, was selected by the US State Department to represent the United States Pavilion at the XIV Venice Architecture Biennale. Franch has taught at Columbia University GSAPP, the IUAV University of Venice, SUNY Buffalo, and Rice University School of Architecture.

Leah Meisterlin is a term assistant professor in the Barnard & Columbia Colleges Architecture Department and CEO & cofounder of Office:MG, a research and design firm dedicated to complex and crisis- or conflict-affected areas. Her research is primarily focused on concurrent issues of spatial justice, informational ethics, and the effects of infrastructural networks on the construction of social and political space. Through her research and in practice, Leah specializes in designing novel methodologies for sociospatial systems analysis at local to global scales.

Mark Wigley is an accomplished scholar and design teacher who has written extensively on the theory and practice of architecture and is the author of Constant’s New Babylon: The Hyper-Architecture of Desire (1998); White Walls, Designer Dresses: The Fashioning of Modern Architecture (1995); and The Architecture of Deconstruction: Derrida’s Haunt (1993). He co-edited The Activist Drawing: Retracing Situationalist Architectures from Constant’s New Babylon to Beyond (2001). Wigley has served as curator for widely attended exhibitions at the Museum of Modern Art, New York; The Drawing Center, New York; Canadian Centre for Architecture, Montreal; and Witte de With Museum, Rotterdam. He received both his Bachelor of Architecture (1979) and his Ph.D. (1987) from the University of Auckland, New Zealand.