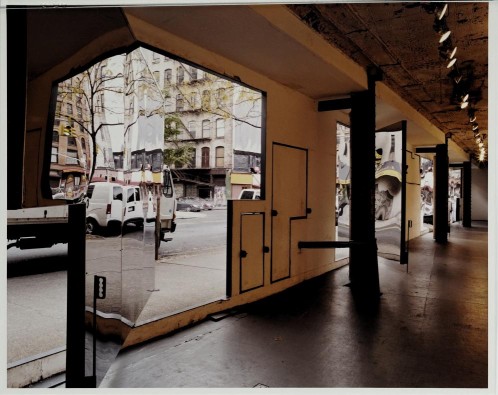 In his exhibition at Storefront, New York and Los Angeles-based artist Warren Neidich explored the complex relationships between architecture, film and photography and their roles in the construction of what he referred to as the ‘mutated observer.’ In the gallery, Neidich presented samplings from his work Remapping, a series of ten-foot-long composite photos of a building with a mirrored façade. Focusing on this reflective surface, Remapping identified the façade as a cinematic device capturing activity streaming by on the street. The large photographs, consisting of four or five views united as a seamless whole with imaging software, depicted a disorienting space in which reality and imagination fuse. Neidich also created a site-specific installation using the Storefront façade: by affixing a mirrored material to the inside and outside of the vertically rotating panels, he turned the façade into a large-scale perspectival device reflecting moving images of the street into the gallery and images of the gallery out onto the street.