home • archive • Some True Stories: Researches in the field of flexible truth

Some True Stories: Researches in the field of flexible truth 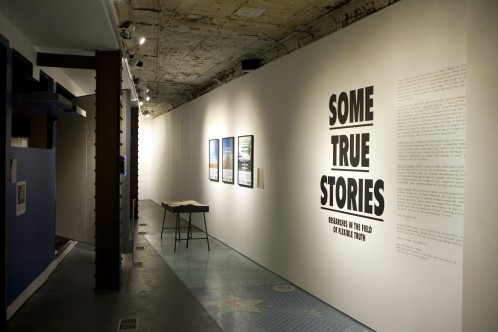 Change rarely follows sanctioned plot lines. Rather it often pivots around hoax, hyperbole and stray details. These phantom turning points are not easily taxonomized or moralized within orthodox political logics. We expect the right story—an epic binary tale of enemies and innocents, when it is often the wrong story—a little epidemic of rumor and duplicity—that rules the world.

Still, the fact that most pigs are wearing lipstick expands an activist repertoire!  Some True Stories is thrilled that two can play at this game. The research collected here considers a dissensus that is less self-congratulatory and less automatically oppositional but potentially more effective (and sneakier). Unlikely or outlying political evidence, with its fickle or underexplored logics, excites feelings of resourcefulness and ingenuity. Here is a large field of mongrel events and category leftovers—butterflies that are not pinned to the board because they do not reinforce expectations.

Architecture and urbanism contribute many wrong stories to the mix as they move headlong into the world, propagating forms of polity faster than proper political channels can legislate them. If the world spins around the actions of discrepant characters, architects, as classic facilitators of power, have long had a seat at the table.

Some True Stories happily swims in these dirty waters with all the other shills, butlers and go-betweens, looking for new points of leverage within the fictions and persuasions that we already have running through our fingers. The artifacts in the room are culled from design offices, commercial showrooms, documentary video, advertisements and informal web networks.

Hoax is design. This collection expels utopian prescriptions in favor of agility, ricochet, “faction” and cultural contagion. We are attracted to spatial entrepreneurialism, unreasonable innovation, impure ethical struggles and obdurate problems that continually resist intelligence. We hope to spread rumors that the world has changed–operating with all the guises and none of the disadvantages of truth.