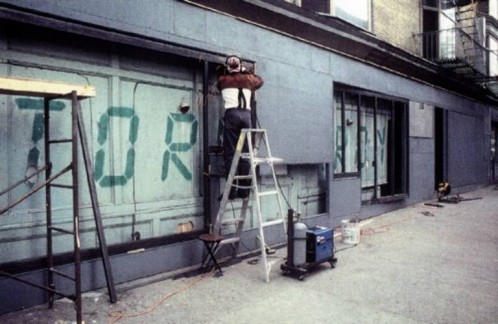 In 1992, architect Steven Holl and artist Vito Acconci were commissioned by co-directors Kyong Park and Shirin Neshat and curator Claudia Gould to transform Storefront for Art and Architecture’s aging facade through a collaborative architectural intervention. Seeking to introduce improbability and to puncture the façade, Acconci and Holl inserted a series of hinged panels arranged in a puzzle-like configuration into the façade. When the panels are locked in their open position, the façade dissolves and the interior space of the gallery expands out on to the sidewalk. As an interdisciplinary collaboration, the façade blurred not only divisions between public and private space but also the line between art object and architectural artifact, suggesting ways that artists and architects can reciprocally engage with each other to benefit their respective fields of knowledge.