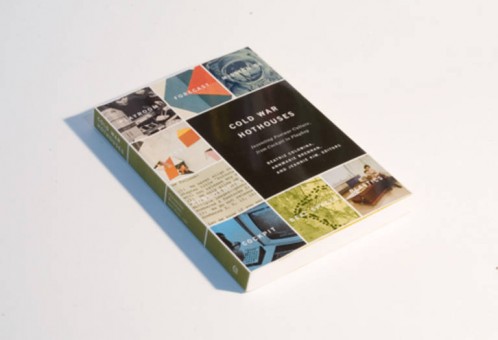 Tailfins, Saran wrap, ball point pens, Slinky toys, Tupperware, highways, aluminum, hula hoops, food blenders, plastics, Barbie dolls, dishwashers, credit cards, office systems, picture windows, bikinis, fast food, TV dinners, drive-in cinemas, play rooms, window air conditioners, satellites, missiles, bomb-shelters, tranquilizers…: the artifacts of Cold War America. By-products of the war effort, they represent the period as if in a constellation, the result of an atomic explosion, each one of them a fragment for detached analysis or speculation, able to bring light into the period; as if an archeological dig where a piece of a jug may help to understand an entire culture, its habits, degree of development, artistic tendencies and so on. By looking closely at some of these remnants we see the cold war period in all its complexity. An archeology of our own period, a time that still haunts us.

Cold War Hothouses: Inventing Postwar Culture, from Cockpit to Playboy is an assemblage of pieces picked up for analysis by a group of PhD candidates at a series of seminars and workshops at the School of Architecture at Princeton University conducted between 2000 and 2002. The theme of the seminar was postwar America, a subject neglected in architectural research until recent years, when several conferences, exhibitions, and articles started to open up the field. Instead of talking about designers, buildings, architectural details, designer furniture, master plans, professional publications, and the like, the research paid close attention to popular magazines and books, advertisements, movies and TV programs, governmental initiatives and developers schemes. The seminar tested the idea that the postwar period no longer celebrated the heroic figure of the architect transforming the spatial order, even though most architects were still modeling themselves as heroic. The real changes were going on elsewhere. Objects of everyday life involved more radical transformations of space than the most extreme architectural proposals. Indeed, the most radical architects were those who were able to understand and respond to these cultural and technological shifts. In that sense the cold war itself was a hothouse, breeding new species of space, a new organizational matrix. Hence the title Cold War Hothouses, meaning not simply the effect of the Cold War on house design but all the new forms of domesticity that emerged during the period and that in many ways we still occupy today. This beautifully illustrated collection of essays is based on a series of seminars focusing on the impact of the Cold War on the built environment, which was conducted at Princeton University by Beatriz Colomina.

Beatriz Colomina has collaborated with Storefront for Art and Architecture on several exhibitions. She is a Professor of Architecture and Founding Director of the Program in Media and Modernity at Princeton University.

Annmarie Brennan is a Lecturer of Design Theory in the Faculty of Architecture, Building, and Planning at the University of Melbourne. She teaches architectural theory as well as studio design subjects. Her research focuses on the history and theory of 20th and 21st century design and architecture.