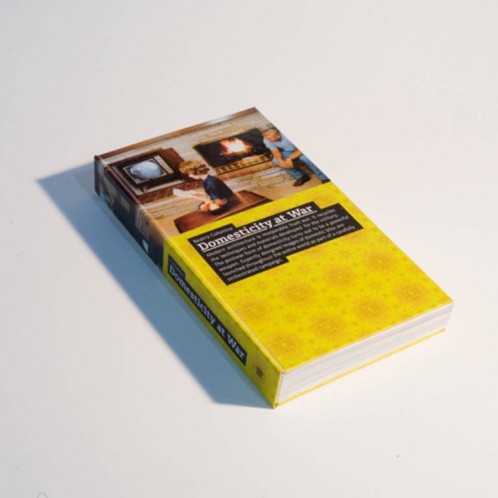 In the years immediately following World War II, America embraced modern architecture—not as something imported from Europe, but as an entirely new mode of operation, with original and captivating designs made in the USA. In Domesticity at War , Beatriz Colomina shows how postwar American architecture adapted the techniques and materials that were developed for military applications to domestic use. Just as manufacturers were turning wartime industry to peacetime productivity—going from missiles to washing machines—American architects and cultural institutions were, in Buckminster Fuller’s words, turning “weaponry into livingry.”

This new form of domesticity itself turned out to be a powerful weapon. Images of American domestic bliss—suburban homes, manicured lawns, kitchen accessories—went around the world as an effective propaganda campaign. Cold War anxieties were masked by endlessly repeated images of a picture-perfect domestic environment. Even the popular conception of the architect became domesticated, changing from that of an austere modernist to a plaid-shirt wearing homebody.

Colomina examines, with interlocking case studies and an army of images, the embattled and obsessive domesticity of postwar America. She reports on, among other things, MOMA’s exhibition of a Dymaxion Deployment Unit (DDU), a corrugated steel house suitable for use as a bomb shelter, barracks, or housing; Charles and Ray Eames’s vigorous domestic life and their idea of architecture as a flexible stage for the theatrical spectacle of everyday life; and the American lawn as patriotic site and inalienable right.

Domesticity at War itself has a distinctive architecture. Housed within the case are two units: one book of text, and one book of illustrations—most of them in color, including advertisements, newspaper and magazine articles, architectural photographs, and more.

Beatriz Colomina has collaborated with Storefront for Art and Architecture on several exhibitions. She is a Professor of Architecture and Founding Director of the Program in Media and Modernity at Princeton University.