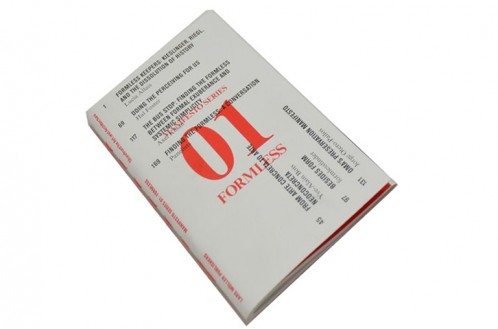 FORMLESS is the first publication to be born out of Storefront’s Manifesto Series. It includes architects, artists, landscape architects, engineers, historians, critics, theorists, and other relevant and emerging figures from both inside and outside of the field of architecture discussing on the idea of Formless. Storefront’s ongoing Manifesto Series is an event based encounter that intends to develop and expose fresh and new ideas in a short and precise manner. The purpose of the Manifesto series is to encourage the formulation of positions in relation to specific topics and instigate spirited discussion and exchange in a dynamic and polemical context. The events aim to reinvigorate and reinvent the manifesto format as a way of exchanging ideas, compelling participants to denounce a certain past or present condition, proclaim an alternative present, past or future situation and indicate a strategy or method of action. This publication is a matured version of the manifestos presented at Storefront for Art and Architecture on September 23rd, 2011.

Impulses toward the formless, alternately understood as struggles to escape form as a manifestation of various norms and constraints, are as old as architecture itself. But the formless is also increasingly in the air today, whether explicitly in discussions of the “formless” quality of the city, or implicitly in talk of atmospheric buildings, randomized structures, and the dematerialization (or increased mediation) of architecture. There is no doubt that part of its appeal lies in the fact that the formless is frequently found at intersections between architecture and other fields, at those intriguing moments when architecture unravels and can perhaps be woven into other practices and fields, from art to ecology or engineering. Nevertheless, the formless as a subject has not yet been theorized rigorously in architecture. It underpins a wide range of tendencies that have not yet been connected, or even directly acknowledged or identified. This book represents a first step toward this articulation.

Learn more about Manifesto Series: Finding the Formless which took place at the Storefront gallery in 2011.

Garrett Ricciardi (Editor) is co-founder of FORMLESSFINDER.  He received his Masters of Architecture from Princeton University where he was awarded the Suzanne Kolarik Underwood Prize for Excellence in Design.  He has previously studied at the Whitney Museum of American Art’s Independent Study program, received his BFA from Cooper Union, and worked for Stan Allen Architect and Steven Holl Architects.  His art and design work has been exhibited internationally at institutions such as MoMA (NY), MAXXI (Rome), MIT List Visual Art Center and The Sculpture Center, for which he has received grants from the Foundation for the Contemporary Arts, NEA, and the Bose Audio Corporation.

Julian Rose (Editor) is co-founder of FORMLESSFINDER.  He received his Masters of Architecture from Princeton University where he was awarded the School of Architecture History and Theory Prize. Prior to attending Princeton he earned his BA from Harvard University in Art and Architectural History. He has worked at Acconci Studio on a variety of international architecture and public art projects and for AMO on Rem Koolhaas’s proposal for the State Hermitage Museum in Saint Petersburg, Russia. Rose’s writing on both art and architecture has been published internationally in such publications as Log, Artforum, and October.

Vito Acconci is the founder of Acconci Studio and Professor of Architecture and Urban Design at Pratt Institute.

Lucia Allais is Assistant Professor of History and Theory of Architecture at Princeton University.

Julie Bargmann is founder of D.I.R.T. Studio and Associate Professor of Landscape Architecture at the University of Virginia School of Architecture.

Yve-Alain Bois is Professor of Art History in the School of Historical Studies at the Institute for Advanced Study.

Ed Eigen is Associate Professor of Architecture and Landscape at the Harvard Graduate School of Design.

Hal Foster is Townsend Martin ’17 Professor of Art and Archaeology at Princeton University.

Axel Kilian is an Assistant Professor in Computational Design at Princeton University.

Michael Meredith is a founding principal of MOS Architects and Assistant Professor of Architectural Design at Princeton University.

Jorge Otero-Pailos is an architect, historian, theorist and Associate Professor at the Graduate School of Architecture, Planning and Preservation (GSAPP) at Columbia University.