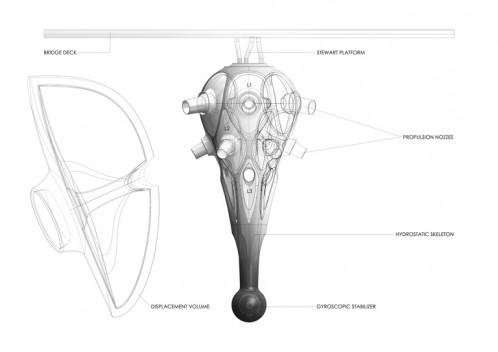 Storefront for Art and Architecture presents a discussion forum about disciplinary specificity and cross-fertilization of thoughts and practices, in this case specifically taking the current exhibition in display, Do Ho Suh’s The Bridge Project, as a point of reference. The work, a contingent object of research, has come into being through a complex set of relationships among different fields of knowledge.

Do Ho Suh will be in the room but not visibly present, intervening only if circumstances, discussion or questions awaken his desire for participation.

Sandra Antelo-Suarez is a curator and editor based in NY. She is the founder Director of TRANS>, a non-profit organization that provides unique platforms for artists to develop works and collaborations through curatorial and editorial projects. Among her curatorial projects are Don’t Trust Anyone Over Thirty: Entertainment by Dan Graham, Tony Oursler, Rodney Graham and Japanther (2004); A Smile Without a Cat (Celebration of Annlee’s Vanishing) a fireworks project by Pierre Huyghe and Philippe Parreno (2003), En el Cielo, an exhibition over the skies of Venice (2001). Currently she is working on the 10th anniversary exhibition of the Jumex Collection, Mexico City.

Dr Armstrong is an interdisciplinary researcher who has trained as a medical doctor and tutors fifth year MArch students in the modification of biological systems for their technical dissertations at The Bartlett School of Architecture, UCL. She has also collaborated with international artists such as Helen Chadwick, Orlan and Stelarc who engaged with the technologies of extreme body modification and the impact of extreme environments on biological systems in projects that exemplified her broader interest in the way in which the environment can directly shape organisms through biotechnological interventions. She has explored some of the possibilities in her SF novel ‘The Gray’s Anatomy’ and also in guest editing Wiley’s ‘SF Aesthetics’ and ‘Space Architecture’. Her work currently focuses on the development of Metabolic Materials for Living Buildings where she works in collaboration with international architects and scientists.

Architect and stage designer, Philip Beesley produces installations using leading-edge technology. He is also a professor at the University of Waterloo School of Architecture and co-director of the University’s Integrated Centre for Visualization, Design and Manufacturing (ICVDM). It is in Toronto that he founded his own firm and works today, designing residential and public buildings and conducting design projects for exhibitions and the performing arts. He has won a number of awards for his work, including the Ontario Lieutenant Governor’s Medal for Architecture, the Prix de Rome for Architecture, and, in 2005, the Canadian Architect Award of Excellence for the graphic design of the French River Visitor Centre. In addition to his architectural work, Beesley has created numerous installations that draw on his research into architectural textiles and more specifically interlinked mesh structures, particularly the Canadian Pavilion at the Venice Architectural Biennale 2010.

Major lead support is provided by Yun Jie Chung. The exhibition is also made possible by generous funding from The Graham Foundation for Advanced Studies in the Fine Arts, and Lehmann Maupin Gallery.

Additional support provided by The Maritime Hotel and Control Group