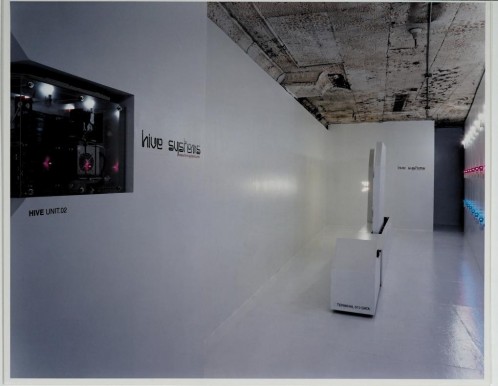 What began as an investigation of real and virtual spaces eventually manifested itself as Hive Systems, a website and physical installation that interacted with each other. The installation was powered by a central server, or brain, located in the gallery, which served as the main generator, processor and distributor of information. The server received input directly from sensors, cameras and triggers in the physical space, as well as via user input over the Internet. In some cases the installation responded directly to this input, reacting through movement, light, or sound to the physical space, or by direct response on the website. The experiences of the physical and virtual users were flexible and interdependent. Ultimately, interaction with the Hive Systems installation was both behavioral (through programmed response patterns), and democratic (through multiple user input).