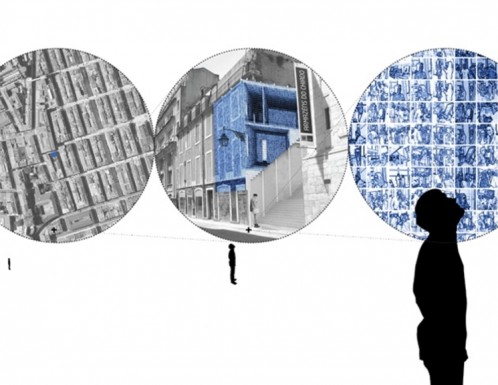 The term horror vacui describes a Moorish visual practice adopted by Portuguese builders in the 15th century, which involved covering building facades with azulejos, blue and white tiles commemorating scenes from historic events, in order to overcome the unbearable emptiness of the wall. Today’s architects are faced with a different kind of void that takes the form of a widening abyss between designers, fabricators, and users, all searching for common ground.

Horror Vacui is an installation for the 2013 Lisbon Architecture Triennale Close, Closer that advocates a return to the bricks and mortar of architectural production in order to re-imagine the obsolete masonry wall as a flickering surface for architectural exchange. Borrowing from the narrative tradition of the azujelos, the project proposes a method of collective storytelling by pairing vernacular production techniques with digital media to temporarily re-clad a building facade in Lisbon.

The process begins with the collection of photographs from the public through an online image bank where submitted images are processed and tiled to create a pixilated composite. They are then printed onto the surfaces of 150 x 150mm ceramic tiles, and brought to the site for installation onto a custom scaffold designed to protect the existing facade.

Through this pairing of the vernacular with the digital, the project hopes to transform the insular process of design into a collective endeavor. Individually, each tile remains a physical register of a subjective recollection of the city. Collectively, the images construct a flattened replica of the building behind, a trompe l’oeil rendered in blue and white. By hiding the facade in plain sight behind a mediated copy of itself, the wall is given renewed relevance as a communicating agent, inviting the public to take a closer look at the hidden depths of an architectural surface.

Ang Li is a designer based in New York City. She received a Master of Architecture from Princeton University and a Bachelor of Arts in architecture from the University of Cambridge. Previously, she has worked in design practices in both Europe and the U.S, including Allies and Morrison Architects in London, and Marge Arkitekter in Stockholm. She was also an editor of Pidgin Magazine, an architectural journal affiliated with the School of Architecture in Princeton. Alongside independent design work, Ang is currently an architect at Adjaye Associates in New York.

Jaffer Kolb is a designer, critic and curator based in New York. Previously he helped curate and oversaw the installation of the 13th Venice Biennale of Architecture under David Chipperfield. As an architectural designer, he has worked for Studio Gang in Chicago, WorkAC in New York, and the Doug Aitken Workshop in Los Angeles. He has participated in exhibitions at London’s Tate Modern, the New Museum in New York, along with smaller gallery shows, and has published over 300 articles and reviews in Icon, Domus, Blueprint, GQ, Modern Painters, and Metropolis, among others. He has lectured at Columbia University, the Cooper Union, Barnard College, and Bard College; and served as a design critic at RISD, Yale University, and the Architectural Association. He holds a Master’s in Urban Planning from the London School of Economics and a Master of Architecture from Princeton University’s School of Architecture. He currently works as a designer at Diller Scofidio + Renfro.

Phoebe Springstubb is a writer and designer from Cleveland, Ohio. She received her Master of Architecture and Bachelor of Arts from Princeton University. Previously, she worked as an architect at Toshiko Mori Architects, where her projects included an exhibition design for the Cooper-Hewitt, National Design Museum. Her research projects on the industrial afterlife of the Volga River in Russia and the urban transformations of the Dutch polder have been supported by Princeton University fellowships. She is currently a curatorial assistant in the Museum of Modern Art’s Architecture and Design Department.

Horror Vacui is part of the Storefront Starter initiative.