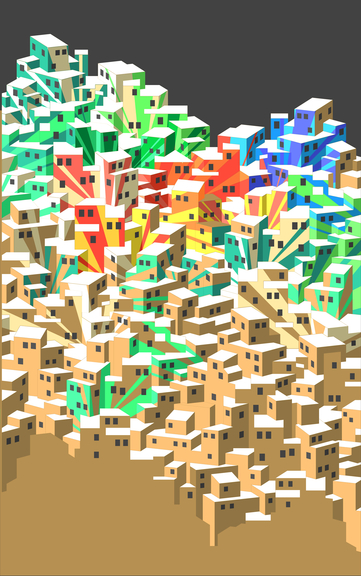 Storefront for Art and Architecture was pleased to present the work of Dutch artists Haas&Hahn in the exhibition “Painting Urbanism: Learning from Rio”. The exhibition showcased paintings, documentary footage, pictures, sketches and plans of past, present and future projects developed by Haas&Hahn. Featured past projects included the Favelapaintings in Praça Cantão in Santa Marta and “Rio Cruzeiro” on the stairs of Rua Santa Helena all in Rio de Janeiro. More current projects included proposals for two New York interventions and future projects span throughout the world.

Painting Urbanism: Learning from Rio – Constant Workshop
Visitors to the exhibition were given the opportunity to learn from Rio sit down and develop new proposals to add to the collection of visionary projects to transform the cities in which we live. All work produced throughout the exhibition was compiled and catalogued and a selection of drawings are available on the Storefront website.

Painting Urbanism: New York Project
This exhibition, presented on the occasion of The Festival of Ideas for The New City, aimed at developing a urban intervention in the Lower Manhattan area. Due to bureaucratic and cultural difficulties within the social fabric of the city, the project proved to be impossible to achieve within the time frame. It was our hope that this exhibition inspired individuals, communities or groups interested and able to facilitate such an enterprise, and we called on all interested parties to contact us for a possible future intervention of this nature and scale in New York.

About Painting Urbanism: Learning from Rio

There has always been within the world of art, anthropology or artistic practice a fascination with the structures of society that exists in the margins of legality, at the edge of the possible.

During the last thirty years, exacerbated by a massive rural exodus and a radical and spontaneous growth of cities throughout the world, slums, places constructed and inhabited outside the normative and canonical spaces of the city, have been at the center stage of the territories of the marginal.

This fascination has incited a large group of architects and artists to immerse themselves within slums as ethnographers, surveyors or involuntary colonizing figures of normalcy. These excursions into the new frontiers of society have resulted in a proliferation of studies on fragmented geometries, new beats and sounds or data visualization, all in the quest to capture, formalize or freeze that what originally captivated by its informality.

This fascination though, has operated sometimes within but often beyond the socio-economical conditions of the slums. When trying to address them, projects have worked oftentimes as contemporary ambassadors of western standards of life: of public and private, of postmen and phones, of roads and squares, of infrastructure and culture, all with little understanding or respect for the inherent virtues and lessons to be learned from these communities.

In 2005, Haas&Hahn landed as a pair of ethnographers to shoot a documentary film on Hip Hop culture in the favelas of Rio de Janeiro. As a product of the multiple informal conversations with the inhabitants, they sensed an opportunity for action beyond documentation and started their first painting project in the favelas with a mural of 150m2 “Boy with Kite” in Vila Cruzeiro. The project, materialized jointly with the inhabitants of the favela, produced an immediate effect in the community and their collective image within the larger metropolitan area. Two subsequent projects in different favelas, Rio Cruzeiro (2000m2 in Vila Cruzeiro, 2008) and Praça Cantão (7000m2 in Santa Marta, 2010) unveiled a methodology of action within the built environment without precedents: Painting Urbanism.

Painting Urbanism resides in the intersection between land art, supergraphics, graffiti and urban planning. It takes the built environment as a continuous territory beyond notions of public and private; it activates the urban fabric introducing new spaces of intensity and collectivity beyond spatial conditions and denounces the underutilization of residual spaces of design and action within the city.

Haas&Hahn have been able to generate a body of work that grows from the formal intricacies, legal conditions and social dynamics inherent to slums and produce a method of action that would hardly be able to be envisioned within the normative spaces of western models of urbanization.

Learning from Rio: While currently, the majority of cities and governments worldwide are more concerned and focused on preservation and restoration than change and action, Painting Urbanism opens up the possibility of large interventions within the city that bring together the large questions set forth by the big visionary proposals of architects and urban planners of the twentieth century. Painting Urbanism is able to act within the present urban reality by intervening on the liminal surface of the constructed city and produce spaces of true collective aspiration just through color, form and imagination.

This exhibition showcases the work produced by Haas&Hahn during the last six years and a series of proposals for two New York interventions and future projects throughout the world from the suburbs in Paris to the city of Cairo.

We invite you to come, learn from Rio and act.

Haas&Hahn is the working title of artistic duo Jeroen Koolhaas and Dre Urhahn. They started working together in 2005.

Jeroen Koolhaas (Rotterdam, 1977) studied graphic design at the Design Academy in Eindhoven and has been working as a freelance audio-visual designer and illustrator for the New Yorker magazine since graduation. www.jeruniverse.com

Dre Urhahn (Amsterdam, 1973) has worked as a journalist, copywriter, and art-director and has set up successful companies specializing in different fields, from event management to television production.